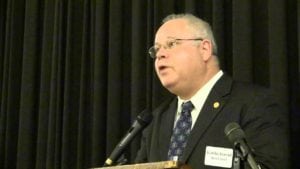 He was kind of hoping that he would be placed on hold for an hour, or that he would reach a recording telling him that the embassy was experiencing a high volume of calls, and would he please try again later.

“I was hoping that so many people would be calling that I could not get through,” Ariel-Joel said.

Ariel-Joel, a senior rabbi at The Temple, was disappointed for good reason. Considering Sunday’s decision by the Israeli government of Prime Minister Benjamin Netanyahu to suspend its 2016 decision to permit egalitarian worship
space at the Western Wall – a move that would bestowed new legitimacy on the Reform and Conservative movements in the Jewish state – he believes that flooding the embassy and Israeli government offices with calls and emails is the best way to fight back.

Shas and United Torah Judaism, two ultra-Orthodox parties in Netanyahu’s governing coalition – with power out of proportion to the actual number of seats they hold – successfully pushed for the suspension.

“They don’t even have 10 percent of the Knesset,” Ariel-Joel said of those parties, “but they control the agenda because without them, Bibi doesn’t have a coalition.”

Reaction to the suspension was swift. The Jewish Agency’s board of governors and the heads of the Reform movement in the United States and Israel have all canceled meetings and events with the prime minister in protest. Likewise, statements of dismay and disapproval have come in from Jewish organizations worldwide.

But Ariel-Joel wants to see grassroots protest from Diaspora Jews themselves.

“I’m calling on every one of us to show our dismay by sending emails to the Israeli embassy in D.C. and to the Israeli foreign minister and the prime minister,” he said. “That’s the most important thing, I think.”

He knows what he was talking about. A former executive director of the Israel Movement for Progressive Judaism (what the Reform movement in Israel is called), Ariel-Joel remembers how the embassy and Israeli government were flooded with calls in the 1990s when the Knesset considered the proposed conversion law, under which conversions done by rabbis not recognized by the orthodox chief rabbinate, would not be recognized in Israel.

The measure failed, Ariel-Joel said, because Netanyahu, then in his first term as prime minister, “was so overwhelmed by the reaction of American Jewry that he backed off.”

The rabbi is hoping for a similar reaction this time.

“How shameful it is that Israel is the only country in the world where Jews do not enjoy freedom of religion and freedom from religion,” he said.

He also is hoping that American Jews will “put their money where their mouth is” and donate to organizations in Israel that are fighting for religious pluralism.