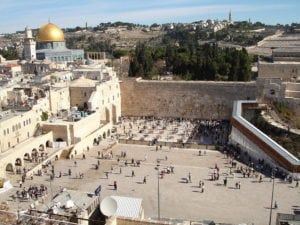 (Editor’s note: This is an updated statement of an earlier story that includes a statement from the Jewish Community of Louisville and other organizations.)

JERUSALEM — Israeli Prime Minister Benjamin Netanyahu’s Cabinet is defending itself again a ferocious protest — both inside and outside of Israel — against the governments move Sunday to rescind its 2016 decision to create an official egalitarian prayer section at the Western Wall.

The governing cabinet also approved a bill to invest authority for conversions in the ultra-Orthodox Chief Rabbinate — a move that will further delegitimize the progressive e religious streams in Israel and call into question the conversions of those who became Jews under Reform and Conservative direction.

The decision announced on both measures comes after the haredi Orthodox United Torah Judaism party and the Sephardi Orthodox Shas party, both members of the current government, put pressure on Netanyahu to scrap the agreement, including threatening to leave the coalition government.

As part of the decision, work on the egalitarian prayer area erected at Robinson’s Arch, located on the southern edge of the Western Wall plaza, will continue.

The prime minister has asked Cabinet Secretary Tzachi Braverman and Regional Cooperation Minister Tzachi Hanegbi to formulate a new plan that will be acceptable to the religious parties. Braverman pushed back on the attacks on the government Monday, saying  the prime minister had issued a directive that “Jews from all streams be able to continue praying there – as they are able to do today.”

But the assault from Netanyahu’s critics continued.

“I want to tell you that the vast majority of the citizens of Israel oppose the two decisions taken yesterday by the government,” said Yair Lapid, head of the opposition Yesh Atid party, referring to the Western Wall decision and the conversion bill. He spoke in English at the start of a party meeting to drectly address the Diaspora community.

Sunday’s Western Wall decision negates an agreement passed in January 2016 by the government for an egalitarian prayer section at Judaism’s holiest site, which was negotiated by the Reform and Conservative movements, the Women of the Wall, the Jewish Agency for Israel and the Israeli government.

Under that agreement, the egalitarian section of the wall near Robinson’s Arch was to be expanded and placed under the authority of a pluralist committee. The section would have had a common entrance with the rest of the Western Wall plaza.

Natan Sharansky, chairman of board of governors of the Jewish Agency, said in a statement issued on Sunday that he is disappointed by the government’s decision.

“Five years ago, the Prime Minister asked me to lead a joint effort to bring about a workable formula that would transform the Western Wall into, in his own words, ‘one wall for one people.’After four years of intense negotiations, we reached a solution that was accepted by all major denominations and was then adopted by the government and embraced by the world’s Jewish communities. Today’s decision signifies a retreat from that agreement and will make our work to bring Israel and the Jewish world closer together increasingly more difficult,” the statement said.

“The Jewish Agency nevertheless remains staunchly committed to that work and to the principle of one wall for one people,” Sharansky concluded.

Responding to the news, Sara Klein Wagner, president and CEO of the Jewish Community of Louisville, issued this statement:

“The Jewish Federation of Louisville is deeply disheartened and dismayed by yesterday’s action taken by the Israeli government to abandon their commitment to provide egalitarian prayer space at the Western Wall.  This sudden change does not align with our belief that all Jews, whether Orthodox, Conservative or Reform, should be allowed the same rights and privileges to worship in this holy space.  This action rejects years of negotiations made in good faith with non-Orthodox religious movements, the Jewish Agency for Israel (JAFI) and many others. This decision will continue to create a divide and alienate our Jewish community from Israel.”

She continued: “The Jewish Federation of Louisville stands strongly with today’s resolution from JAFI calling on the government to halt “dangerous and damaging steps” related to both the agreement for egalitarian prayer at the wall and the proposed conversion bill. This is a moment for our community to take pause. We are committed to bringing the leadership of Jewish Louisville together at this poignant moment in time to consider our relationship with the government of Israel. We are committed to one Jewish people, working together to embrace the spirit and hope of our Jewish homeland that reflects the rights and practices of all Jews.”

In his statement, JFNA President and CEO Jerry Silverman said the decisions “represent a severe threat to Jewish unity.”

“At a time when the State of Israel looks to our communities as strategic partners in combating the delegitimization of the Jewish state, these Israeli government actions complicate this task,” Silverman said.

He urged Federation leaders to continue educating their communities “particularly key stakeholders in your synagogue community about these unfolding issues.”

In a post on Facebook, Rabbi Gilad Kariv, executive director of the Israel Movement for Reform and Progressive Judaism, called the decision a “sad and shameful move that capitulates to the pressure of the Haredi parties.”

The decision is “a serious violation of the basic interests of the State of Israel and the Jewish people. The prime minister and his partners lent a hand to an anti-Zionist move that undermines Israel’s ties with Diaspora Jewry, and weakens the connection of millions of Jews to Jerusalem.”

Anat Hoffman, chairperson of Women of the Wall, called the decision “shameful to the government and its women ministers who were exposed using their vote against women.”

“It’s a terrible day for women in Israel when the prime minister sacrifices their rights while kowtowing  to a handful of religious extremists, who want to enforce their religious customs while intentionally violating the rights of the majority of the Jewish world, 51 percent being women,” Hoffman continued.

“Women of the Wall will continue to pray as we always have in the Women’s Section at the Western Wall, with a Torah scroll and prayer shawls, until women’s equality will be established at the Kotel. Just like you wouldn’t ask a man to take off his Kipa, don’t ask us to stop praying according to our conscience,” she said.

On Sunday morning some 100 members of the Women of the Wall participated in the monthly Rosh Chodesh service at the Western Wall. Before entering the Western Wall plaza, the women’s bags and belongings were searched, including every page on every prayer book, the group said in a statement.

The women also met disturbances by haredi Orthodox women and girls who whistled, shouted and banged in order to silence the prayer. Despite the state’s commitment to prevent such disturbances, the teen-aged girls, dressed in black with their faces covered, were not removed from the women’s section as they continued to harass the worshipers.

The women also smuggled a Torah scroll in to the women’s section and read from it as part of the service.

In the States, Rabbi Rick Jacobs, president of the Union for Reform Judaism, blasted Netanyahu’s about face.

“Prime Minister Netanyahu’s decision to say ‘no’ to his previous ‘yes’ is an unconscionable insult to the majority of world Jewry. We are assessing all next steps,” Jacobs said ina statement. “The Israeli Supreme Court will rule, but even in waiting for the court we will not be still or silent. The stranglehold that the Chief Rabbinate and the ultra-Orthodox parties have on Israel and the enfranchisement of the majority of Jews in Israel and the world must—and will—be ended.

In addition to suspending its decision to create egalitarian prayer space at the Western Wall, the The Israeli government’s ministerial committee for legislation also approved a proposed law that threatens the status quo on conversion to Judaism and dramatically expands the authority of the Israeli Chief Rabbinate.

Likewise, the world Union for Progressive Judaism said the Israeli government’s decisions “deliver a divisive and insulting blow to the millions of Jews who passionately believe in Jewish pluralism.

“By implementing its agreement, relations between Diaspora Jews and the State of Israel would have improved,” the statement continues. “Sadly, the government violated the trust by changing the rules of the conversation.”

The United Synagogue of Conservative Judaism also came out against the suspension. “The Conservative/Masorti movement, speaking as a whole, deplores this action, yet another failure to uphold an agreement reached after years of negotiations, It’s statement said.

“Because we love Israel and see the rising influence of an intolerant religious establishment as an existential threat to its future and to the unity of the Jewish people,” the statement added, “we will not rest until these decisions not only are overturned but also Israel fulfills the promise of its Zionist origins and founding declaration to ‘ensure complete equality of social and political rights to all its inhabitants irrespective of religion, race or sex’ and to ‘guarantee freedom of religion, conscience, language, education and culture.’”