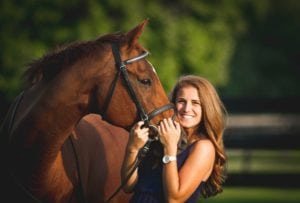 Andrea Glazer will blog from the  Maccabiah Games next month in Israel. (photo by Alex Banks)

Andrea Glazer, the Louisville native and equestrian who will compete for Team USA next month at the 20th Maccabiah Games in Israel, will be doing more than vying for a medal while she’s there.

Glazer, 22, who will compete in the show jumping event, will also blog about her experiences during the Games, and Community will carry those posts on its social media.

The Maccabiah Games, also known as the Jewish Olympics, will run from July 4-18. About 10,000 athletes representing 80 countries are expected to compete.

But there’s more than sports. Maccabiah also will celebrate 50 years of a reunified Jerusalem during its opening ceremony at Teddy Stadium. A Kabbalat Shabbat at the historic Hatachana Compound, Jerusalem’s oldest train station, is planned. Athletes will revel at a street party in Jerusalem and a beach party in Haifa. They will take part in multiple b’nai mitzvah at the Western Wall, and lace up their sneakers for a night run through the capital city.And those activities don’t even include the time Glazer and her family will take to discover the country for themselves.

Of course, we can also expect updates on Glazer’s quest for a medal, how the riding team is doing, not to mention images from Israel.

Glazer, a marketing major at Auburn University, is expected to blog daily while she’s in the country. Look for her posts at Community’s web page, and at our Facebook page.

Louisville-area families raising Jewish children will now have more opportunities to participate in Jewish life, thanks to a grant opportunity recently awarded by the Harold Grinspoon Foundation (HGF). The grants will be distributed to members of PJ Library, the flagship …

That small, little-known law known as the Johnson Amendment, which prohibits electioneering by houses of worship and other charities and which President Trump has vowed to repeal, is exceptionally important to preserve. Even if it is not widely enforced, the …

The Trump administration’s decision to withdraw from the Paris climate agreement has demanded that we all ask ourselves where we stand on questions of climate change, global warming and our collective responsibility for the planet we call home. That the …