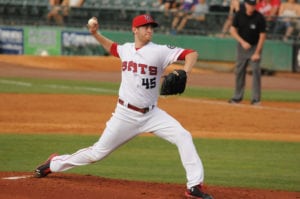 Jon Moscot, the only Jewish player currently with the Louisville Bats, is on the 60-day disabled list recovering from Tommy John surgery (photo provided by the Bats)

The first Jewish Heritage Night at the Louisville Bats game on August 6 will be more than fun, it will renew Jewish Louisville’s connection to the national pastime.

Kids will have a chance to run the bases, a concession stand will be certified kosher, and fans will receive a Hebrew-text “Louisville Bats” T-shirt with the purchase of a $13 ticket. 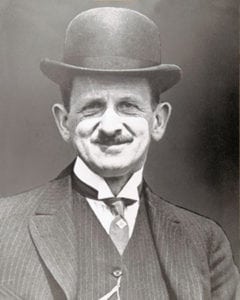 The Jewish connection to baseball in Louisville dates back over a century. In the 1880s, Barney Dreyfuss, a German Jewish immigrant who settled in Paducah, was working as a bookkeeper at a distillery when he joined its semipro baseball team. When the distillery expanded its operations to Louisville, Dreyfuss moved to town and became a part owner of the Louisville Colonels.

The Colonels won the American Association title in Dreyfuss’ inaugural season in 1890. They switched to the National League in 1892 and folded in 1899. Dreyfuss became the owner of the Pittsburgh Pirates and an architect of the first World Series in 1903 between the Pirates and Boston Pilgrims. (Boston won.)

Born in Toronto in 1912, Rosen tried out for multiple minor league teams but was always dismissed because of his short stature. When he tried out for Louisville’s minor league team, also called the Colonels, in 1932, the trainer mistook him for a batboy. Rosen impressed, though; after five years with the club, the Courier-Journal called him the greatest outfielder in its history. Rosen was later called up to the Brooklyn Dodgers and actively supported the Brooklyn Jewish community. 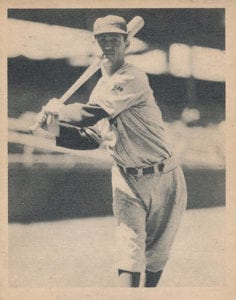 More recently, Jon Moscot is on the roster of the Louisville Bats, a minor league affiliate of the Cincinnati Reds, but the righthanded pitcher is recovering from Tommy John surgery. He has spent parts of the last two seasons with the Bats and the Reds.

Had Moscot been healthy, he would have pitched for Team Israel in this year’s World Baseball Classic, but he still traveled to the Jewish state with the team and participated in publicity events to promote baseball there. Team Israel surprisingly advanced to the second round in the tournament, during which time its caps and unofficial mascot, the Mensch on the Bench, became fan favorites.

The Jewish Heritage Night with the Bats will be the next link in Jewish Louisville’s history with baseball. Tickets are available at http://jewishlouisville.org/jewish-heritage-night.

The recent citywide drive to send clothing, shoes and other necessities to Syrian refugees in Greece – supported largely by Jewish Louisville – was worth the effort, a local humanitarian says. Dr. Muhammad Babar Cheema just returned from Greece where …

As a special tribute to all the June birthdays and anniversaries, John Gage performed for the Senior Nutrition program on June 13. (Photos by Courtney Hatley)