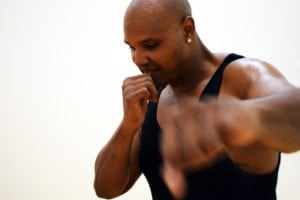 Ibn Ali, the 2006 USBC Cruiserweight Boxing Champion, will teach the sport at the J starting in July . (photo by Courtney Hatley)

Weighing in at 215 pounds, and towering at 6-foot-5, Ibn Ali, nephew of the great Muhammad Ali and a champion boxer in his own right, sparred with me Monday, June 5, on the handball court of The J.

He never laid a glove on me, which, of course, was his choice. (Had he wanted, I’d be a floor mat by now.)

Still, those few minutes pretending to “float like a butterfly and sting like a bee” (he likes to use some of his uncle’s more memorable lines), demonstrated what Ali hopes to do with the new boxing class he will begin teaching next month at The J: It’s about fitness, sure, but it’s also about mental discipline, confidence, and reintroducing the sport to those genuinely interested in fighting by rules.

“I hope this will be a launching point for many doors to open,” Ali said about the class. “This won’t be a one-time thing. If the seed is planted, other great things can stem from it. Other things can happen from this. Let’s make it happen, I’m ready.”

Susan Kwasny, health and wellness director at The J, said Ali’s class, which will start the first week in July, will differ significantly for the Better Body Boxing class that is already being taught.

“The Better Body Boxing class is a fitness class for members who are trying to get into shape through an aerobic type boxing workout,” she said. “The Ali program will be offered for the entire Louisville community and will also involve kids. The program is for those who would specifically like to learn or improve boxing skills. It is also for children who would like to learn focus, confidence and discipline.” 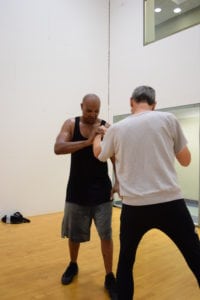 The class will be held in the upper gym. Punching bags, speed bags, speed ropes, gloves and wraps will be provided.

In the class, Ali will emphasize stretching, working out, proper nutrition, abstinence from alcohol and other things that go into a fighter’s regimen.

At the end of the class, he hopes his students will have learned, not only how to fight, but how to live.

“This teaches people how to fight, not just in boxing, but in the game of life, period,” he said. “You can use these methods, these strategies to teach more discipline, to help teach more respect.”

He’s not coming alone, according to the champ, assisting him in the class will be Doug Meyers who has trained the likes of Mike Tyson, Greg Page and Riddick Bowe during his career.

He even hinted that his father, Rahman Ali, a former heavyweight fighter, could drop by.

Ali knows what he’s teaching. The 38-year-old Louisville native turned pro at 22 without ever fighting as an amateur. He went on to compile an 11-2 record with one draw. Sixty-four percent of his wins were by knockouts.

In 2006, Ali won the USBC cruiserweight championship belt, a title he held for three years until his retirement.

“I got into boxing late,” Ali said. “Normally, if you want to get into boxing, you will start as an amateur and you’ll start roughly around the age of 9 or 10. But me, I never really had that desire until probably about the age of 17 or 18. I got into the gym, [and] I said, ‘you know what, I’m going to try see if I have even a taste of what my dad had or what my uncle had.’” 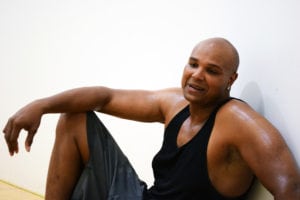 Ali: “It’s going to be a good thing for the youth, the inner-city youth for the City of Louisville.” (photo by Courtney Hatley)

“Things began to come to me naturally,” he continued. “I never fought amateur. I worked in a gym with professional fighters from the age of roughly around 18 to about 21 then I went pro. It was blessing; the skills came to me naturally, the quickness came to me, the endurance, my eye for the sport, my coordination began to flow. It was a gift that I had.”

He said he hopes the class will include people from West Louisville and Prospect, training side by side. In fact, he wants the class to be an antidote to the violence gripping parts of Louisville

“It’s going to be a good thing for the youth, the inner-city youth for the City of Louisville, for all these killings going on amongst the youth,” Ali said. “They have no structure, they don’t have nobody to tell them, ‘I love you,’ and not just say it, but mean it, believe it.”

As a special tribute to all the June birthdays and anniversaries, John Gage performed for the Senior Nutrition program on June 13. (Photos by Courtney Hatley)

Israeli lawmakers who vote for a conversion bill making its way through the Knesset are not welcome in Chicago, said a top Jewish leader there. “The federation in Chicago will not be hosting any member of Knesset that votes for …

Jay Klempner ended his two-year term as chair of the JCL Board of Directors at the Annual Meeting Thursday, June 8. “We had a lot of work that we accomplished,” Klempner told the capacity crowd in reflecting upon his term, …