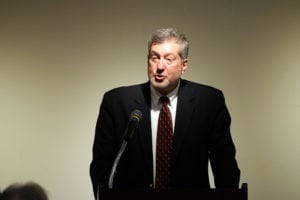 Martin Raffel outlined six reflections from the Six-Day War at a program Tuesday, June 6, at The J. He said those reflections will help American Jewry deal with the legacy left by that “transformational” time. (photo by Courtney Hatley)

On the 50th anniversary of the Six-Day War, Martin Raffel said the Jewish world is failing to transmit the lessons of that period to its younger generations.

He said many Jews have grown up with no memory of the events that led to the war: the angry mobs in Arab capitals “screaming for Jewish blood,” Egypt’s closure of the Straits of Tiran to Israeli shipping, the expelling of United Nations peacekeeping forces from Sinai, an arms embargo by France, U.S. reluctance to intervene, and a genuine fear by American Jews that another Holocaust was in the making.

Israel, of course, won that war, but its victory, he said, sowed “seeds of disunity” that are dividing American Jews to this day.

Raffel, former vice-president of the Jewish Council for Public Affairs and a recognized expert on Israeli history, was the feature speaker for a Tuesday, June 6, program at The J, “The Six Day War: A History-Making Event for Israel and the Challenges Created by It.”

Speaking to more than 50 people in the Patio Gallery, including rabbis and lay leaders, Raffel outlined what he called six “reflections” about the Six-Day War. Really, they were six lessons for American Jewry as it processes the lasting effects of the conflict:

• Israel was vulnerable in 1967 and still is. Though many young Jews today see the Palestinians as David to Israel’s Goliath, Raffel said Israel remains threatened by internal and existential forces, not the least of which is Iran.

“We have to find the tools to convey to the not-old-enough generation, who did not live through those events, who don’t have the same visceral feeling of Israel’s vulnerability, who see Israel as exceptionally strong militarily … that Israel’s security should never be taken for granted,” he said.

• Don’t forget 1948. The War for Independence defined Israel’s character as a democratic state with a Jewish majority, but young people don’t necessarily understand why Israel must be a Jewish state (the United States, after all, is not a single ethnic state).

“The notion of an ethnic majority state … is alien to those who see the world through the lens of our American experience,” Raffel said. “We take for granted that our community, especially the younger generation, has come to terms with Israel’s dual identity as both Jewish and democratic. We miss this more foundational discussion at our pearl.”

• Commitment to Jewish peoplehood matters. Raffel recalled 1985 when he visited the then-Soviet Union and met clandestinely in a Moscow basement with 25 refuseniks. During that meeting, as he spoke in Hebrew about Jerusalem, there was loud banging on the door, which unnerved him. His hosts, though, calmly assured him that it was just the KJB who couldn’t get through the locked entrance and would eventually go away.

For Raffel, it was a powerful moment. “All Jews are responsible for one another,” he said. Still, he said the community hasn’t done enough to teach younger Jews about “one of American Jewry’s proudest moments” ­– the rescuing Soviet Jews.

“Jewish peoplehood really matters, and I don’t think we’ve done a good enough job of transmitting the importance of that concept to the not-old-enough generation.”

• Be mindful of the real issues Israel faces. It is wrong to have a “utopian sense” of Israel, the kind that took hold following the Six-Day War, Raffel said. It’s also wrong to see Israel as a country that can do no right, which is common today.

“It’s long past time for a mature relationship that sees Israel as it is,” Raffel said, “both the good and the bad.”
For that reason, he took aim at those who say Israel’s “dirty linen” should not be aired in public.

“I’m not at all afraid of our dirty linen,” he said. “In fact, I see Israel’s problems as an opportunity for our constructive engagement. If we want more religious pluralism in Israel, let’s work for it. If we don’t like some of the things that Israel does to its non-Jewish citizens, then let’s try doing something about it.”

• Never give up on peace – with security. A supporter of a two-state solution with the Palestinians, Raffel is pessimistic that he will live to see it. Then again, he noted, Jews of the time never expected to see Egyptian President Anwar Sadat fly to Israel in 1977, speak to the Knesset and eventually make a peace with Prime Minister Menachem Begin that has endured for nearly 40 years.

The Palestinian issue continues to “loom large,” with no solution in sight, but Raffel doesn’t despair.

I’m more OK with realism,” he said “but looking back on history, I’m not OK with pessimism. Moreover, the Jewish search for peace is not discretionary.”

He envisions a three-way track to peace that includes growing bilateral relations with the Palestinians, improving external relations with the Saudis and like-minded regimes, and the work of NGOs on both sides of the Green Line that build trust while working together on critical domestic issues.

“Israel and the Jewish people should never feel comfortable controlling the lives of another people,” Raffel said. “We must encourage the parties to keep trying and, in the meantime, take steps to at least preserve the viability of a two-state solution.”

• Jews must be concerned about more than just Israel. American Jews must work with like-minded people to advance shared values and interests on critical issues, Raffel said. “Jews have a responsibility, not just to our own, but to humanity.”

During the Darfur genocide, he said he was heartened to see signs in front of so many synagogues proclaiming, “Save Darfur,” much like the “Save Soviet Jewry” signs from an earlier time.

“For me, every Darfur sign was a badge of honor,” Raffel said. “We cared about the fate of another people.”

“There are many daunting challenges to the wellbeing of our community, our country and our planet,” he added, “What I do know is that we in the Jewish community should be fully engaged, locally, nationally and internationally. Our voice must be heard in the halls of power. It is both the right thing to do, and it is also the smart thing to do.

The first Jewish Heritage Night at the Louisville Bats game on August 6 will be more than fun, it will renew Jewish Louisville’s connection to the national pastime. Kids will have a chance to run the bases, a concession stand …

(Editor’s note: This is an update of an earlier story that includes quotes from the JCL Annual Awards Meeting.)  Tell your children of it and let your children tell their children. Joel 1:3 Dr. Harold Berg had a favorite saying: …

Last year, Looking for Lilith Theatre Company commissioned Nancy Gall-Clayton to write a full-length play for this summer’s Unheard [outloud] Festival, which will celebrate 15 years of dedication to its mission, “lifting up unheard voices.” For Gall-Clayton, it was a …