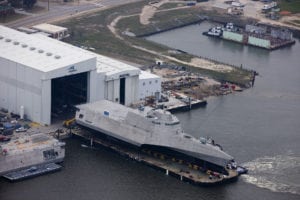 A United States Navy warship named for Gabby Giffords will be put to sea next week.

The ship will be officially named Gabrielle Giffords in honor of the Arizona Democratic congresswoman who survived a 2011 gunshot wound to the head. It will be the first Navy ship named after a living woman in 160 years.

The ceremony, which will take place in Galveston, Texas, will feature Hillary Clinton and former Vice President Joe Biden.

The vessel is a 418-foot combat ship bearing machine guns and missiles, according to The New York Times. Below the mast, a box will hold an American flag patch that Giffords’ husband Mark Kelly, a retired astronaut, wore on his spacesuit; a purple heart left at the hospital where Giffords was treated for the gunshot wound; her congressional identification; and a 19th-century coin.

Six people died and 13 were injured in the January 2011 assassination attempt, in which Giffords was shot in the head at close range. She recovered from the attack and resigned her seat a year later. She learned that the ship would be named for her on the day she resigned. In the years since, she and Kelly have become gun safety advocates.

“That our Navy chose to give my name to this ship is an incredibly humbling honor — one I would never have imagined, one I will never forget, and one for which I always remain grateful,” Giffords said, according to the Times. “When we celebrate the commissioning this weekend, I will be thinking of the thousands of hardworking Americans who built this ship and the brave men and women who will serve aboard her.”