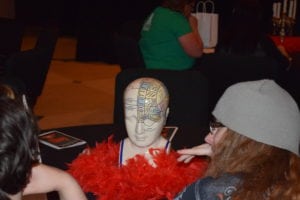 Props from The Rocky Horror Show show were on every table at the Linker Auditorium as the audience watched the cult play cabaret style. (photo by Lee Chottiner)

Feelings of nostalgia and anticipation hit me on opening night of The Rocky Horror Show at The J.

Rocky, the movie, was released in 1975 and became a verifiable cult classic with a still-growing fan base. I first saw the show years ago.

But this was my first time seeing it live.

I was highly intrigued and delighted by Creative Director John R. Leffert’s arranging of the auditorium, stage and audience seating. Instead of a traditional theater set-up, it looked like a ballroom for a reception, with tables scattered throughout the room – each adorned with props from the show (shiny glass beakers, red feather boas, sleek black tablecloths).

At stage-left, there was an ornate chair and a reading lamp; to stage-right, a glowing blue time-travel device. The set design was simple, yet nuanced. This served well during the performance as audience members and actors interacted, fully immersed in the show.

Throughout the play, the grand staircase at stage center served as its own portal to the audience, adding some great moments for humor. (Be ready for the hilarious “A Stormy Night on the Road” scene; it’s a blast.)  Sometimes, I forgot I was watching a play, becoming swept through the wacky world of Rocky.

Sound and lighting were spot-on for the performance. The lighting was colorful, adding an auxiliary layer of depth to the environment. The live orchestra was a typical band setup – drummer, guitarist, and bass player – led by Music Director/Keyboardist Jim Dersch. The band added energy as it often shouted out quips and interacted with the play right along with the audience.

Rocky opens an inviting space for all kinds of people and expression. If you want to dance – do the Time Warp – then dance. If you want to get rowdy, scream profanities, have a wild night, Leffert’s production is perfect for all that.

The costumes looked like the original film adaptation of Rocky, exploding with style and magnetism. The outfits were tight leather, extremely showy and, of course, abundant with lace and lingerie. Leffert’s costume design was inspired, and stayed true to the film while adding his own taste to the mix. In other words, not much was left to the imagination.

The acting for this production set the bar high. Many times, I was reminded of the movie, both in sound and aesthetic. Leffert maintained the picture’s look while adapting the play to its classic, culty late night double feature mood. 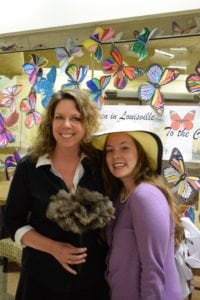 Many showed up for the late-night showing dressed as their favorite cast members — a custom among Rocky Horror fans. (photo by Lee Chottiner)

Physical sight gags abounded. Specifically, there was a scene where Brad and Janet are driving and a certain, shall we say, fleshly set of windshield wipers show up to incredible comedic effect.

Stand-out actors were Jessica Adamson as Columbia, Lauren McCombs as Magenta, Kiel Dodd as Rocky, and Frank Goodloe III as the one and only Dr. Frank-N-Furter. Dodd really rocks some serious push-ups, and pulls off the Rocky role perfectly, playing naive, kind of dull and ultra-vain. Goodloe is thrilling as Frank-N-Furter, keeping a similar vibe to Tim Curry’s film performance, while also adding his own flair and thunderous personality.

Janet Weiss, played by Erin Jump, takes a lot of hits in this one, so make sure to let her have it. (You’ll understand when you get there.)

Rocky is full of personality – a bunch of people singing cacophonously in a room together, enjoying the freedom to be who they are and love who and what they choose.  The story and pacing of the play (much like the movie) do not really follow any sort of coherent plot or purpose, but it’s all about the music and fun, baby!

For first-time Rocky-niks, you have nothing to fear. Embrace the longtime fans; follow their cues, shout some banter, and don’t be afraid to let loose. You’ll be fine. (Prop bags are available for $8 apiece, well worth it for the added experiences throughout the play.) 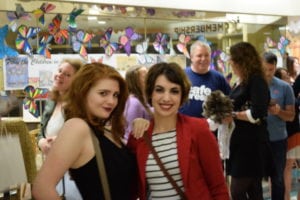 Rocky Horror fans were ready to do the Time Warp at The J. (photo by Lee Chottiner)

The subject matter is risque, to say the least, so be prepared for all kinds of dirty jokes and expletive-laden ripostes. It’s also important to acknowledge that Rocky has some issues with its tone, specifically the harsh sexual encounters between Frank-N-Furter, Brad and Janet. While the show, at its core, is playful and flirtatious, nostalgia can be powerful enough to overshadow important discussions on representations of sexual consent.

Leffert’s production of Rocky was pure pleasure. All are welcome, and the room is open for interpretation, free expression and, most importantly, dancing. Check out the show; you won’t leave disappointed.

The Rocky Horror Picture Show is playing at The J’s CenterStage on Saturday June 10 at 7:30PM and 11PM and Thursday June 15 at 7:30PM.  The play runs about 90 minutes, with a 15-minute break in between acts. The J is located at 3600 Dutchmans Lane. Ticket prices are $22 dollars and are available online or at the door. There is a cash bar. Visit CenterStageJCC.org for more information.