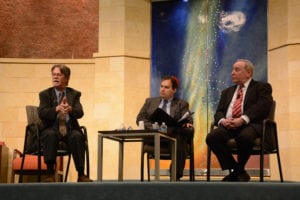 If anyone who went to the Battle for Israel’s Soul program Monday at Adath Jeshurun expecting to see a heated debate bordering on fisticuffs, they probably left a little disappointed.

The “battle” was more like a tete-a-tete between friends –which, in fact, it was.

J.J. Goldberg a liberal columnist for Forward and Jonathan Tobin, a conservative opinion writer for JNS.org, have met like this many times. During the program they went out of their way to refer to each other as “friends” – even when they categorically disagreed with each other.

Which was probably their overarching point in the two-hour program: American Jews are as split over Israel as the rest of the country is on other issues. They read and watch only what affirms their own positions and they disregard what the other side thinks.

For the sake of Israel and American Jewry, the men said, that must stop.

“We live in a bifurcated nation,” Tobin told the audience of 175. “Social media makes it worse.”

Thanks to social media, he said, people can unfriend anyone just for disagreeing with them, or block any story, column or comment that doesn’t jibe with their own sense of reality.

“You can completely isolate yourself from anything that doesn’t affirm your beliefs,” said Tobin, who urged the crowd to read his own work as well as Goldberg’s. 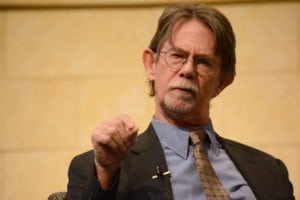 Goldberg assured the crowd that the differences the two men articulated during the program did not get in the way of their friendship, which he assured everyone was genuine.

“Don’t walk away thinking we’re faking this,” he said.

All friendship aside, the two journalists did duke it out – softly – on politics, the peace process and, to a lesser extent, Trump.

Tobin dismissed Palestinian Authority President Mahmoud Abbas as a peace partner for Israel because, saying he subsidizes families of terrorists and names public squares in the West Bank 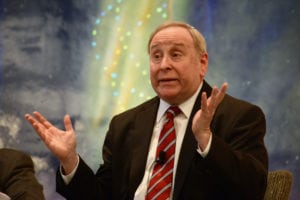 for so-called “martyrs.” Goldberg, on the other hand, said P.A. authorities, under Abbas, have worked with Israeli officials to curb terrorist attacks, noting there has been no return to the wave of suicide bombings of 2005.

“Few people have noticed that it ended years ago,” Goldberg said. “Abbas has been fighting terror.”

But Goldberg also said it’s too much to expect Palestinian sentiments toward Israel to change as long as they’re under occupation, which is why, he said, there must be a “divorce” — a two-state solution.

While Tobin called a two-state solution “the most rational and sane way to resolve the conflict — in theory,” he said Israelis were souring on the idea.

He noted how the two leading opposition leaders to the current government, Isaac Herzog of the Zionist Union, and Yair Lapid of Yesh Atid, have issued manifestos saying it would take 10 or 20 years to make a peace arrangement while trust is restored.

Those statements, Tobin said, reflect a galvanizing of Israel public opinion against a two-state solution any time soon.

“What they (Israelis) want to do is trade land for peace,” Tobin said, “not land for more terror.”

On politics, Goldberg and Tobin dived into how Republicans and Democrats treat Israel. Tobin, speaking directly to liberals in the crowd, told them to stand up against what he sees an apparent split in the Democratic Party over support for Israel.

“This is your battle to fight,” he said. “You should stand up to your party because that’s where the action is.”

Goldberg, on the other hand, took aim at American Jewish organizations, which he said are narrowly focused on foreign affairs and not enough on the domestic issues that unite most American Jews.

“The issues that unite us are the issues we face at home,” he said, adding, “that doesn’t mean we shouldn’t be concerned about Israel.”

The two journalists did find common ground on some issues. They both warned of the threat posed by the BDS movement to young Jews on college campuses.

And they both agreed that President Donald Trump is unpredictable, though Goldberg suggested Trump, by virtue of some of his appointments and the softening of his positions since his inauguration, might not be as strident a supporter of the Jewish state as Israeli Prime Minister Benjamin Netanyahu had hoped. 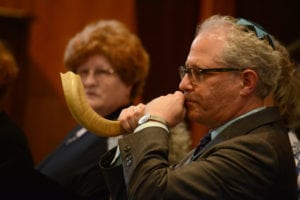 Interestingly, neither man mentioned Monday’s story by Reuters that Hamas would remove the goal of destroying Israel from its latest policy document and end its association with the Muslim Brotherhood.

Since the program was held on Yom HaZikaron, Israel’s memorial day, Cantor David Lipp of Adath Jeshurun and Rabbi Gaylia R. Rooks of The Temple opened the program with two long blasts on their shofars. The blasts simulated the siren drones in the Jewish state that call citizens to stand in silence for the country’s fallen.

“Whether you’re right or left or center,” Lipp said afterwards, “I think you can agree that we all yearn for peace.”

CenterStage’s 2017/18 Season has something for everyone and season tickets are on sale now! Cole Porter’s Kiss Me Kate starts off the season July 6-23 with “Another Op’nin’ Another Show” & “Brush Up Your Shakespeare!” CenterStage will once again be …

‘Step back, stop, breathe’ Every week, I write an email to all of Jewish Hospital, Frazier Rehab, along with all of the Jewish Medical Centers and Jewish Hospital Shelbyville, and several other members of the Catholic Health Initiatives family, reflecting …

What does a legend of the theatre do near the end of a groundbreaking career? Generally, he writes a memoir or films a sentimental journey of origins and greatest hits and basks in the limelight of whatever is left of …