CenterStage closes its 2016/17 season with an intimate portrait of musical icon Stephen Sondheim in his own words and music with Sondheim on Sondheim, presented by Hilliard Lyons. The award-winning Broadway show runs May 11-21 at the Linker Auditorium inside the Jewish Community Center.

Hailed as a “funny, affectionate and revealing tribute to musical theatre’s greatest living composer,” Sondheim on Sondheim uses exclusive interview footage to bring the audiences inside the life and mind of Stephen Sondheim and his artistic process. 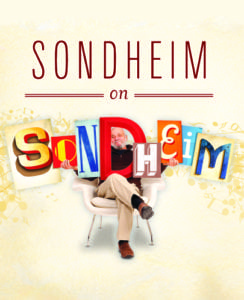 Originally conceived and directed by friend and frequent collaborator, James Lapine, the show brings to life the process of some of Sondheim’s most well-known songs for plays, including A Funny Thing Happened on the Way to the Forum, Company, Follies, A Little Night Music, Sweeney Todd, Sunday in the Park with George, Into the Woods and Assassins. It also discusses works from some songs that were not big hits, and why Sondheim felt they did not work for his big productions.

The CenterStage production will feature company veterans including Lauren McCombs, Jennifer Poliskie, Debbie King Raque, Erin Jump, Andrew Newton, Andrew Hughes, Josh Gillam and Russ Dunlap. Also appearing in the play is Sondhiem himself through more than 100 interview clips. CenterStage and Hilliard Lyons’ production of Sondheim on Sondheim opens on Thursday, May 11, and runs through Sunday, May 21. Tickets cost $20 in advance or $22 at the door and can be purchased over the phone by calling 502-238-2709 or online at www.CenterStageJCC.org.

Fifty years ago, as Israel celebrated her birthday on May 15, 1967, many feared for her survival. Much of the Arab world was gearing up to destroy the fledgling state, and there was talk of another Holocaust. Miraculously, that is …

There is no better sign of summer than the outdoor pools opening at The J. As always, the Family Pool and Seng Jewelers Wading Pool will open on Memorial Day weekend. A membership at The J is what you need …

Summer camp is right around the corner. With only 5 weeks until the start, Camp J is hard at work planning and preparing for the best summer yet. Summer Camp is a special time for children of all ages to …