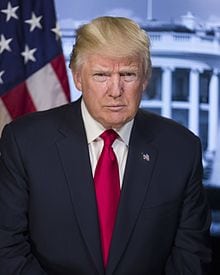 JERUSALEM — President Donald Trump likely will make his first visit to Israel at the end of next month.

Israeli and Trump administration officials are currently in “advanced talks” about a visit on May 21, before Trump’s scheduled European tour or at the end of the month at the conclusion of that visit, Israel’s Channel 2 reported Wednesday.

It will be Trump’s first visit to Israel.

Deputy Foreign Minister Tzipi Hotovely later confirmed to Army Radio that a Trump advance team is expected to arrive in Israel on Thursday to make site visits to places that will appear on the U.S. leader’s itinerary. She said he would stay one night in Israel.

The visit will come shortly after Trump meets with Palestinian Authority President Mahmoud Abbas on May 3 in Washington, D.C. Trump hosted Israeli Prime Minister Benjamin Netanyahu at the White House in February.

Trump is seeking “a conflict-ending settlement between the Palestinians and Israel,” the president’s spokesman, Sean Spicer, said last week in confirming Abbas’ visit.