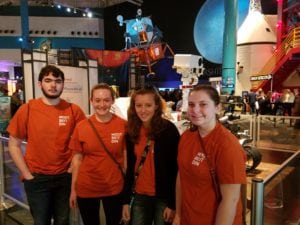 Thanks to driverless cars and a simulated accident, four High School of Jewish Studies (HSJS) students now have a pretty good idea what it’s like to serve on a religious court.

Ben Berdichevsky, Abigail Brodsky, Bailey Hatzell and Saralee Renick just finished a comprehensive course in the rules of law Jewish-style. It began last October with their enrollment in an elective class and culminated with their participation in a moot beit din (mock trial) competition that took place during a shabbaton, March 17-19, in Houston.

The Louisville four were among some 150 students, representing schools from around the country, taking part in the event. It was sponsored by the Prizmah Center for Jewish Day Schools.

Rabbi Michael Wolk, of Keneseth Israel Congregation, coached the team. He said the teens devoted the entire school year to researching a contemporary legal issue, using the principles of halachah (Jewish legal code) to prepare an opinion based on law and facts.

The case at hand? A self-driving car that swerved to avoid killing a pedestrian in its path and ended up hitting an oncoming vehicle, seriously injuring its driver.

Grappling with who was at fault in the exercise, the students spent weeks categorizing the self-driving car according to halacha. They debated whether the driver, who was distracted at the time of the accident, should be liable for expenses incurred by the injured driver or if the car’s manufacturer, who programmed the vehicle only to protect human life (pikuach nefesh), should be responsible.

In its written brief submitted to the judges, the HSJS team compared starting the self-driving car with lighting a fire (aish) and concluded the person who lit the fire – the driver in this case – should be responsible for the damage. They used feedback from the judges to prepare their oral argument for the trial.

HSJS Principal Sarah Harlan got interested in the moot beit din two years ago when she learned that the trial competition, originally available only to Jewish Day School students, was being piloted to supplemental high schools as well.

“I felt strongly,” she said, “that our students’ participation in the program would provide them with a terrific opportunity to develop public speaking, research and leadership skills and to connect with other Jewish high school students.”

Harlan secured grants from the Jewish Community Foundation and the Jewish Community of Louisville to underwrite expenses. The school then recruited students for the year-long elective. By October, the 11th grade class received its book of halachic sources along with information about the case.

While HSJS did not win, the students returned home motivated to participate in another moot beit beit din next year.

“We listened to the other groups in our room,” said Abigail Brodsky, of Keneseth Israel, “and came to realize there was no right or wrong decision, just a difference in interpretation. We felt confident and thought we did well in defending ourselves.”

Saralee Renick, of Temple Shalom, was surprised to be one of the few Reform students present. Most competitors, she said, were from Conservative and Orthodox day schools on the East Coast. Still, they all got along well.
Bailey Hatzell, of The Temple, said she and her classmates bonded as they worked together 50 minutes every Sunday to hammer out the finer points of ancient law and come to a conclusion.

“We all identify as Jews,” Hatzell said, “but we all differ in our own beliefs. We also learned that that’s OK.”

She also found religious teens she met at the competition were open to discussing politics and sharing their thoughts on gay rights, a woman’s right to choose, meditation and even yoga.

Ben Berdichevsky, of Congregation Adath Jeshurun, is interested in a career in law.

“I enjoyed our Moot Beit Din class and had a great time at the trial competition, Ben said. “We all worked hard together and I would love to do it again.”

There is no better sign of summer than the outdoor pools opening at The J. As always, the Family Pool and Seng Jewelers Wading Pool will open on Memorial Day weekend. A membership at The J is what you need …

Have you seen the new boxing equipment at The J? Located in the lower gym, the boxing dummies are used for Better Body Boxing, a new group fitness class offered at The J on Tuesdays at 6 p.m. and Fridays …

CenterStage closes its 2016/17 season with an intimate portrait of musical icon Stephen Sondheim in his own words and music with Sondheim on Sondheim, presented by Hilliard Lyons. The award-winning Broadway show runs May 11-21 at the Linker Auditorium inside …