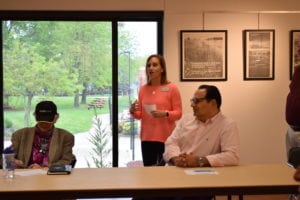 Jewish Louisvillians and The J members have begun to imagine how a future JCC would fit their changing community.

Meeting Sunday, April 23, at the JCC for the first of three scheduled open “charrettes,” more than 40 members of the community floated ideas for what they would like to see in the facility of the future.

“We have a once-in-several-generations opportunity to redesign a facility that will be a legacy, not only for our kids, but our grand kids, if we do it right,” said Jeff Goldberg, chair of the JTomorrow! steering committee for the project.

A charrette is a term of art for a meeting of stakeholders to iron out problems and map solutions for a given project. It could also be described as an enhanced brainstorming session.

The JCC currently occupies an 84,000-square-foot facility along Dutchmans Lane that was built in 1955. While approximately 1,200 people pass through the door each day, experts say the facility will not meet the needs of future generations.

On this day, participants broke off into separate sessions to discuss program and facility ideas in the areas for arts & ideas/Jewish life, active adults/seniors, early childhood education, camp/youth/teens, and health/wellness/food sustainability. Associates from the LMH Architecture firm, which is managing the charrette phase of the project, oversaw each session.

Bingaman said he was looking for unique ideas from the participants. And he got several.

For example, someone suggested providing tech courses and linking the campus to the burgeoning high-tech sector in Israel. 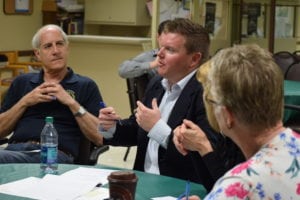 Craig Lustig, a Louisville attorney and participant in that session, liked that idea and added to it, saying such a campus should be open to adults and children alike. He said one of his clients laments the lack of a highly skilled IT professionals in America.

Many participants broached ideas with young people in mind.

Bill Altman, another member of the JTomorrow! steering committee, shared a few such proposals, suggesting that the new center contain a genealogy center, a photo lab or a “really cool coffee shop.”

He also said none of these ideas should be acted upon without first picking the brains of children and teens to see what they want from their JCC.

“We have to ask people of a certain age if these would be draws,” he said.

That’s going to happen, according to JCL President and CEO Sara Klein Wagner. “We plan to have a charrette just for teens,” she said.

“I’m really worried about Jewish kids not knowing [other] Jewish kids,” said former Louisville Mayor Jerry Abramson, who recalled how the JCC was the place where kids from different synagogues could come and meet each other.

Other participants called for a “versatile” theater that could house CenterStage, children’s programs and the film festival. And the Standard Club, by virtue of its green space, could become an off-site summer camp, or a shabbaton retreat, they said.

Wagner said she is prepared to schedule more charrettes as needed to let people join the discussion.
“We’re not voting and making decisions here today,” she said. “It’s about making sure we have the right space and the right opportunities for the next generation.”

Late last year, Rabbi Irwin Kula gave a compelling community address titled “Embracing Change.” During his address, he noted that the most observed Jewish practice today is the Passover Seder. The order and structure of the Seder are much the …