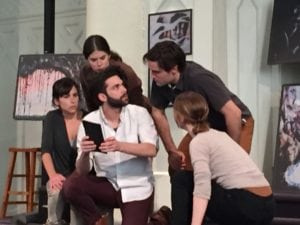 The cast of Kultar’s Mime. Ben Gutman (center), the grandson of a Holocaust survivor, told Community why the play is so important to him. (photo by Lee Chottiner)

For two days in April 1903, armed gangs, stoked by blood libel, swept through Jewish neighborhoods in the Russian city of Kishinev. In the end, the pogroms left 49 people dead and 500 injured. Women were raped, and thousands of homes and shops were looted.

The two pogroms were the inspiration for the play Kultar’s Mime, a dramatic indictment of sectarian violence, which was performed Sunday, April 2, at the Unity of Louisville church – the old Adath Jeshurun synagogue – in Smoketown.

Staged before more than 100 people, overwhelmingly Sikh, in the main sanctuary of the building, Kultar’s Mime is about a collective of young Jewish artists who decide to commemorate the Kishinev Pogroms. In doing so, they learn about the Delhi Massacre.

“In a powerful moment, they decide they want to honor the suffering of their forebears by focusing on the pain of other victims who suffered under similar circumstances,” said Sarbpreet Singh, an NPR commentator who co-wrote the play with his daughter, J Mehr Kaur. “They are moved by the fact that the Delhi Massacre is really unknown in the world.”

One by one, the actors stepped on the stage to open the play reciting lines from Yiddish poet Hayyim Nachman Bialik’s epic poem In the City of Slaughter, which tells the gruesome story of Kishinev (Bialik, a young student at the time, actually visited the city after the pogroms and saw the destruction for himself.)

They quickly morph into the five modern day Jewish artists who discover the Delhi Massacre and travel there.

They morph once again, this time into four children who survived the massacre, but were scarred by it.

We meet Kultar, for whom the play is titled, a deaf mute who watched as his father was hanged from a banyan tree, a little girl whose father was doused by gasoline and set afire (she clung to his hand until she was pulled away but was still burned herself), a teenage boy who put out his own eyes after watching his mother ravaged then murdered, and a teenage girl who was gang raped and then went mad. 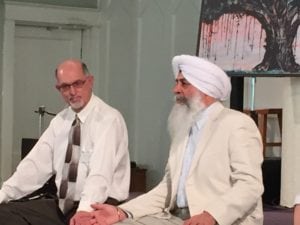 Sarbpreet Singh (right) seen here with Unity of Louisville Rev,. Ray Nelson, takes questions after the play from the minister and the audience. (photo by Lee Chottiner)

In the backdrop, one actor plays Rajiv Gandhi, son of the slain prime minister and her eventual successor, who is detached from the violence, saying only, “When a great tree falls, the earth does shake.”

The play, which is adapted from Singh’s poem of the same title, is rhythmic, even Shakespearean in its lines, but brutal in its depiction. The actors, portraying a mob in the streets, slink through the aisles of the old synagogue, chanting “blood for blood.” On stage, they symbolically act out the raping of the young girl (The audience was warned beforehand that some of the scenes are jarring.)

The play used almost no staging, just eight graphic paintings exhibited about the pulpit and Indian music playing in the background.

In a discussion that followed, Singh, who is traveling with the cast, told the crowd that the play was originally written in 2013 by his daughter while studying theater at Smith College, but was adapted after they discovered Bialik’s poem.

“I was struck by the similarity of “The city of Slaughter” and my poem,” he said. “In both works, the author acts almost as a tour guide, bringing in the observer and showing them what had happened.”

As often happens during its performances, people in the audience who were in India during the massacre stood and recounted their own experiences.

Those are powerful moments, especially for one cast member, Ben Gutman, the grandson of a Holocaust survivor who portrays Kultar in the play.

Speaking to Community after the show, Gutman said his grandfather, a survivor of the Lodz Ghetto and Auschwitz who died during two years ago at age 91, never spoke of his experiences.

“We never had a discussion,” he said, “never a word. It affects our family today.” 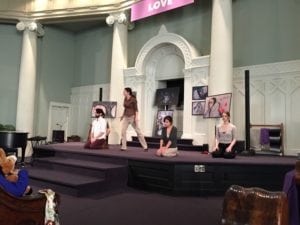 The cast of “Kultar’s Mime” recited lines from “In The City of Slaughter,” the epic poem by Hayyim Nachman Bialik, during the prologue of the play. (photo by Lee Chottiner)

So when he hears Sikhs standing up after his performances to share their experiences, it reminds him how important it is for him to be in this production.

Singh said Kultar’s Mime, which is a free play supported by several Sikh foundations and donors, will probably end its run this year – in Israel. He said he’s already in talks with a Jerusalem-based theatrical company about possible venues.

For now, though, he said he was pleased by where in Louisville the play was staged.

“What could be a better setting that this beautiful church which I understand was modeled after a mosque and used to be a synagogue?” he asked. “What could be better than that?