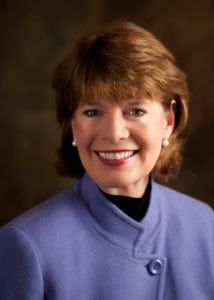 Abramson was recognized by Red Cross National CEO Gail McGovern and her executive team at a March 28 awards dinner and ceremony in Washington, D.C.

The wife of former Louisville Mayor and Kentucky Lieutenant Governor Jerry Abramson, Abramson has been with the American Red Cross Louisville Area Chapter for 25 years. During that time, she has “served as a living example of community service leveraging her relationships to further the mission of the Red Cross by increasing statewide involvement with community partners, corporate leaders, increasing the number of volunteers throughout Kentucky, as well as helping support fundraising efforts,” the Louisville Chapter office said in a prepared statement.

Specifically, Abramson has chaired the statewide Volunteer Steering Committee, which is developing the Red Cross volunteer workforce in Kentucky. As its chair, the steering committee has established the Volunteer Recruitment and Engagement Task Force Teams in 10 locations throughout the state. This has resulted in the appointment of more than 30 leadership volunteers in key positions in all lines of business.

Under her leadership, Welcome Teams have been formed in 10 locations to pave the way for 1,236 volunteers who joined the workforce in fiscal year 2016 – a 280-percent increase over the 417 new volunteers in the previous year.

Abramson was also instrumental in forming a professional development training program for Red Cross employees and volunteer in fiscal year 2016, resulting in an engagement workshop for all regional leadership. She has also played a role in developing a “Leading through Change” seminar for the regional Disaster Services Team.

The Presidential Award for Excellence is given each year to American Red Cross employees and volunteers who demonstrate superior job performance aligning with the organization’s priorities. This award is presented to only 30 Red Cross individuals across the country.