As Rabbi Susan Silverman touched on Purim during her sermon, Saturday, March 18, at Congregation Adath Jeshurun, she invoked one of the lesser-known aspects of the holiday.

Esther, the savior of the Jews of ancient Persia, was the adopted daughter of Mordechai.

Later, as she spoke to Community, she went further. Not only had Esther been adopted, but so had Ruth, even Moses.

“It’s amazing in history how many kids were adopted,” she said.

Yes, Silverman spoke about Women of the Wall, and she does sit on the board of that well-known organization, which fights for pluralistic worship at the Kotel. But this visit to Louisville, as well as her 20-city swing through North America, is primarily about adoption.

Silverman, the sister of comedian Sarah Silverman, has started a nonprofit organization, Second Nurture, which is encouraging adoption within the Jewish world of children in foster homes and institutions. 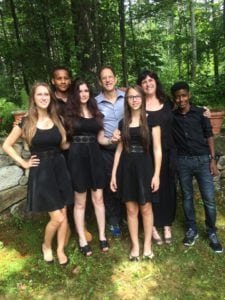 Rabbi Susan Silverman, pictured here with her husband, Yosef Abramowitz and their five children, will talk about adoption and Women of the Wall during the Adath Jeshurun shabbaton in March. (photo provided)

Adoption has become the primary thrust of Silverman’s rabbinate and Second Nurture is attracting attention. It has even forged some notable partnerships such as the Dave Thomas Foundation. Thomas, founder of the Wendy’s hamburger chain, was a champion of adoption and he, too, had been adopted.

Silverman, who along with her husband, Israeli businessman and activist Yosef Abramowitz, adopted two boys from Ethiopia (they also have three other children), said Second Nurture is geared to older children. Infants, she said, are easier to place.

“Our concern is getting kids who don’t have families into families,” she said. “What we’re talking about is older kids in foster care and older kids in institutions internationally.”

According to the Second Nurture mission statement, “There are 81 million Americans who have considered adopting waiting children – children who are not yet adopted because of their age, health or being part of a sibling group — but have not.

It gives three reasons why: a cumbersome bureaucracy, affordability, the need for support.

“Our mission” the statement concludes, “is move those adults from hesitation to action in order to get children into the permanent, loving families they need and deserve by creating cohorts of adoptive families within supportive communities.

“Mainly, the way we look at adoption in society is it’s a way for families to become parents (who can’t do so naturally). My job is to switch that paradigm on its head and say, that’s well and good, but adoption is also a way for kids to get parents.”

Locally, Silverman named Judy Tiell, executive director of the Jewish Family and Career Services, which cosponsored the rabbi’s visit, as her contact in Louisville as she tries to establish her organization here.

A 501.(c)(3) charitable organization, Silverman said the one-year-old Second Nurture is still in its infancy. Much fundraising and organization remains to be done before it can provide the assistance necessary to make more adoptions possible.

“All we’ve done so far is planted the seeds, we’ve done that in lots of places and lit lots of fires, and we’ve gotten some incredible partners like the Dave Thomas Foundation,” she said. “Now, phase 2, is where we’re ready to come home and map everyone everywhere [who has expressed interest], see where we want to have our hyper-focus and raise money so we have the staff and the funding to move forward.”

The Louisville A squad won this year’s AZA Drew Corson Basketball Tournament, beating the Indianapolis A team for the second straight year. Louisville guard Gabe Sherman believed his squad was the favorite all along. “We don’t like losing,” he said. …

Daniel Scofield claimed the grand prize of this this year’s Louisville’s Got Talent competition, capping the evening with an impressive tap dancing performance. Dancing to choreography that resembled the dash and grace of Fred Astaire, Daniel captivated the audience as …