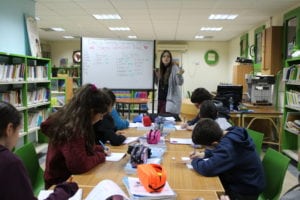 Rebecca Waller prepares a group of sixth graders for their weekly vocabulary quiz in the library of the Yachdav School in Be’er Sheva, Israel. Waller teaches English at Yachdav as a Masa volunteer. (photo by Amanda Levin)

Imagine you are leading a class of fifth and sixth graders four days a week. They speak three languages – which is two more than you do – and seem to have more energy in one day than you had in all your years of elementary school.

But then again, nothing about their school is like yours. Theirs is in Israel, in the heart of the Negev Desert.

Sound challenging? You have no idea.

For the past six months, I have been leading a class just like that, teaching English at the Yachdav School in Be’er Sheva. It has been an unbelievable challenge – yet at the same time, it has been one of the most rewarding times of my life. As I learn more about each of the children I teach, I also learn more about myself.

This isn’t my first time living and working abroad. As a student at the University of Louisville, I participated in the International Service Learning Program, an interdisciplinary initiative that took me to Croatia and the Philippines. There, I supported learning and development among local youth, which were incredible experiences. During my last semester, as I thought about what to do after graduation, I kept returning to the idea of going overseas again.

It was a chance encounter at my local Jewish Community Center’s 125th anniversary gala, where I ran into an old friend who had participated in a Masa Israel Journey program, that led me to the Masa Israel Teaching Fellows (MITF), which is designed for young professionals like myself who want to teach English as a second language. Hearing about it, I knew I wanted to combine my passion for international education with my Jewish identity.

I had been to Israel a couple of times before, on Birthright and Onward Israel trips, but nothing could have prepared me for that first day as a MITF fellow in an Israeli classroom. I had no knowledge of the educational system there; I spoke a completely different language than just about everyone at the school; and I was an outsider to the Yachdav community. 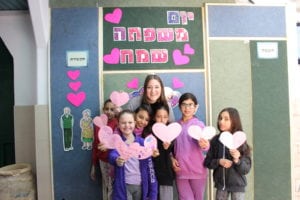 Rebecca Waller with more of her students

Understanding the curriculum, the school structure as well as the school and class layout also were problems that I immediately faced. And the students I was assigned to presented their own unique challenges.

Still in Israel, I work with a wide range of fifth- and sixth-graders, including some who don’t know the English alphabet and others who are almost fluent English speakers. I help lead classes, tutor students one-on-one, and lead small-group instruction, which has become the highlight of my fellowship. Every morning I gather with a group of fifth grade girls, all of whom struggle with behavior issues and hyperactivity. They barely spoke a word of English when I first met them.

It took a while for me to determine the best way to engage those girls in particular. However, as I’ve gotten to know them, I’ve learned to get creative, using pictures and charades, allowing me to gain their attention and trust – all while incorporating as much English as possible. Over the past six months of my 10-month fellowship, I’ve been so proud to watch them grow and learn. I’ll always cherish the relationships we’ve built.

I couldn’t have done it on my own. Through the Uplan (Hebrew language school) classes arranged by Masa Israel, my comprehension of the Hebrew language has drastically improved, and I’m now able to hold basic conversations. My Masa Israel program advisors give me the resources I need, and the other MITF fellows help me get me through the long days. There are 13 of us here in Be’er Sheva, and it is refreshing to know we have each other.

The staff at the Yachdav School has also been incredibly welcoming. It seems that each week I’m being invited to a different bar mitzvah, wedding or Shabbat dinner. 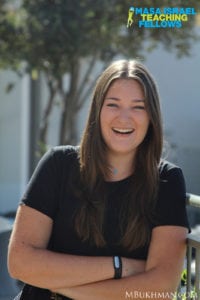 Overall, my time teaching in Israel has been nothing short of amazing. The challenges I face are endless, but I wouldn’t trade them for anything. The kids I work with each day and the strangers, now family, I’ve met so far, have made this journey something special. This has been the experience, and the challenge, of a lifetime.

(Rebecca Waller is a Louisville native and a 2016 graduate of the University of Louisville. She is currently in Israel through Masa Israel Journey, an initiative of The Jewish Agency for Israel and the Israeli government, which offers individually tailored programs that immerse participants in the community as they embark on a journey that will change both the course of their lives, and of the Jewish people’s future.)

Members of YAD and the Cincinnati JCC’s young adult group joined each other Sunday, March 19, for a day trip to Red River Gorge, one of Kentucky’s most beloved natural resources. The group made new friends, hiked together and explored …

At Passover, Jews over the world gather to celebrate zman cheirutenu, the season of our freedom. We will read all about freedom from slavery. We will drink four cups of wine to rejoice in the four freedoms given to our …