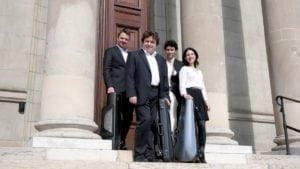 Sergey Ostrovsky knows there are edgy string quartets out there. They’re playing modern classical music, reaching out to schools and getting young people hooked on the genre.

It’s just that the Aviv Quartet, the string instrument group he founded 20 years ago in Israel, isn’t one of them.

“I must say, I’m a little old fashion and conservative,” the first violinist of the group told Community. “We do play quite a few pieces of contemporary music, pieces that were written for us – we do pieces of living composers – but we’re selective in the choices. There are a few groups that specialize in that. I let them do what they do best and I try to do what I do better.”

So when the Aviv comes to Louisville for its first performance here on Sunday, March 19, 3 p.m., at University of Louisville School of Music, Comstock Hall, it will perform works by Mozart, Shostakovich and Ravel.

No apologies, Ostrovsky said. Even the great masters, whose works have been played for decades, have plenty of musical secrets yet to yield.

“There is so much to learn,” he said, “and I would like to spend my time, and the time of my quartet, focusing on that.”

The quartet actually began playing under another name in 1996, according to Ostrovsky. It renamed itself a year later.

“We looked for a name that would reflect the young spirit of Israel, and Aviv represented the best way,” he said. (Aviv means spring in Hebrew.)

Since its founding, the Aviv has performed at Carnegie Hall, Alice Tully Hall, the Library of Congress, and has played at several international festivals and competitions.

In so doing, the group has made an even bigger name for itself: fame.

The quartet consists of Ostrovsky and Philippe Villafranca on violin, Noemie Bialobroda on viola, and Daniel Mitnitsky on cello.

They play as a unit, Ostrovsky said; no one performer outshines another.

“Each voice in a strong quartet is very personal,” he said. “Each one has its role and importance. When you’re playing in a string quartet, it’s a real voice and not an instrument. We try to achieve a real voice.”

Tickets may be purchased at the door, or online at louisvillechambermusic.eventbrite.com/. General Admission tickets are $25; students, $5 (age limit applies). A talk will precede the performance at 2 p.m. in the School of Music, adjacent to Comstock Hall.

Audience members, Ostrovsky said, will hear how powerful such a small music ensemble can be.

“The energy created by the quartet is sometimes much stronger than the orchestra,” he said. “Sometimes the orchestra does not achieve the sound as strongly as a quartet of voices achieves.”

P.L. Travers’s Mary Poppins series (1934-1988) formed the foundation for the film Mary Poppins (1964) which preceded the play of the same name 40 years later. By that time, Mrs. Winfred Banks had evolved from a stereotypical suffragette to a …

NEW YORK —  Thanking the FBI and police for the arrest of Juan Thompson, who allegedly made eight bomb threats to Jewish institutions, the Anti-Defamation League called the current wave of anti-Semitic acts “unprecedented.” “Law enforcement at all levels is a …