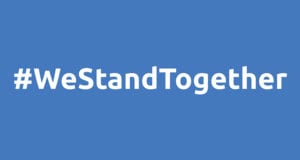 In the wake of Wednesday’s bomb threat at The J, one  of 120 to hit JCCs across North America, a massive solidarity rally is planned for Sunday, March 12, 3:30 p.m., on the front steps of the center.

The #WeStandTogether Rally for Unity will include rabbis, cantors, lay leaders and hundreds of others — Jew non-Jew alike — all making a clear statement against anti-Semitism and other forms of hatred in Louisville.

JCC and interfaith community leaders will be among speakers, all taking the podium beneath a large banner with the hastag “#WeStandTogether.”

Wednesday’s bomb threat was emailed shortly before noon. President and CEO Sara Klein Wagner immediately summoned all department heads to her office. Seconds later, a “code orange” came over the intercom announcing that all staff and members must leave.

The building was quickly cleared. Preschoolers were wheeled out of the center in cribs as caregivers spoke soothingly to them to keep them calm.

Meanwhile, police cordoned off all entries to the campus as a news helicopter hovered overhead.
While this threat came in the form of an email. Other JCCs have received phoned threats during this period.
Long lines of cars slowly made their way out of the parking lot as traffic along Dutchman’s Lane came to a crawl.
After searching the building, police gave the all clear around 2 p.m.

Chabad members passed out drinks to people as they waited to reenter the center.

During an impromptu press conference, Wagner said The J had been prepared for such an emergency.
“We have been watching with heavy hearts what’s been going on at sister JCCs and have been prepared in case we received a bomb threat,” she said. “Unfortunately, we did.”

She did not have an exact number, but said 200-300 people could have been inside the building at the time of the threat.

She credited her staff for following the procedures set forth and quickly clearing the center.
Other Jewish institutions reacted to the situation by notifying its members their members that their staff and facilities were fine.

In addition to  LMPD, Louisville Metro EMS, Louisville Fire, and Homeland Security agents responded to the call. There were no injuries, police reported.

Keneseth Israel, which is less than a mile from The J, sent out an email to its members

“The purpose of this letter is to let you know that Keneseth Israel did not receive any threat, nor did we have to initiate any lock down or evacuation procedures,” Executive Director Yonatan Yussman wrote. “We did take certain additional security precautions while the threat was still ‘live’ at the JCC.”

Both Louisville Mayor Greg Fischer and U.S. Rep. John Yarmuth condemned the bomb threat. “Whether this was meant as a prank or a true threat,  it has no place in our compassionate Louisville,” the mayor said in a prepared statement.

Yarmuth, who is Jewish, said in his statement: “My heart goes out to those who were made to fear for their lives or the lives of their children because of today’s bomb threat at the Louisville JCC. I commend JCC leadership and first responders for the way they handled the matter and am relieved no one was hurt. It’s a truly sad reality that this latest anti-Semitic threat comes as a surprise to no one…. All Americans deserve the peace of mind of knowing that their leaders will stand with them regardless of their faith, skin color, or ethnicity. This fear and hate cannot become the new norm.”

Since January, there have been six waves of threats of lethal attacks leveled against JCCs and other Jewish institutions. The latest this week included four offices of the Anti-Defamation League.

Institutions in big and small cities have been targeted.

This week threats were even received by two Canadian JCCs, in Toronto and London, Ontario.
In all, more than 100 Jewish institutions, mostly JCCs, have received bomb threats since the beginning of the year.

In total, there have been 120 threats to JCCs according to the JCC Association of North America, but officials there have said it’s difficult to keep a running count of all threats, which would include day schools, synagogues and other institutions. 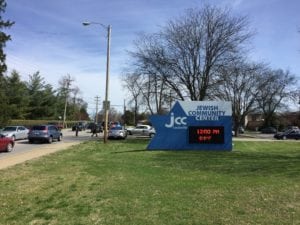 Police direct traffic out of The J parking lot as traffic on Dutchman’s Lane slows to a crawl. (photo by Lee Chottiner

The last two weeks saw vandalism at Jewish cemeteries in Philadelphia, St. Louis and Rochester, as well as two more waves of bomb threats called into JCCs, schools and institutions across the country, representing the fourth and fifth waves of such harassment this year.

No explosive devices have been found following ay of threats.

This week, all 100 U.S. senators signed in a letter to Attorney General Jeff Sessions, Homeland Security Secretary John Kelly and FBI Director James B. Comey stating that the threats against JCCs “are not isolated incidents.”

“We are concerned that the number of incidents is accelerating and failure to address and deter these threats will place innocent people at risk and threaten the financial viability of JCCs, many of which are institutions in their communities,” the letter said.

It continued, “Your Departments can provide crucial assistance by helping JCCs, Jewish Day Schools and Synagogues improve their physical security, deterring threats from being made, and investigating and prosecuting those making these threats or who may seek to act on these threats in the future.”

The JCC Association has also sent a letter to Sessions, signed by 141  JCC leaders, urging Sessions to “take immediate action to advance  the investigation.”