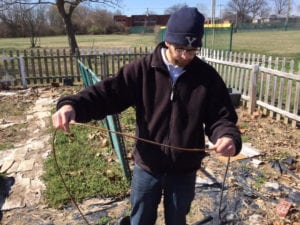 (Editor’s note: This is an updated version of a previously posted story, which contains new information about a Kindred volunteer program.)

Within earshot of Watterson Expressway traffic, plots of young wheat and rye are growing.

Fruit trees are budding, albeit prematurely, due to the unusually warm February.

Cabbage, kale, carrots, turnips, beets and radishes are ripening to the point that they are ready to be eaten straight off the stalks or right from the ground.

This is the community garden at The J, a source of fresh produce for the Meyer Food Pantry at the Jewish Family & Career Services.

The garden sits just beyond the ball field and Klein shelter, far from the foot traffic at The J, yet Michael Fraade, JOFEE (Jewish Outdoor Food Farming and Education) fellow, who tends the garden, thinks its purpose – even its existence – have become better known since his arrival in Louisville.

But there is still work to do.

“More and more since I got here, I hear that people are aware of it, which I think is great,” he said. “There are still people who do not know about it, but I think that’s changing.”

Recently, Fraade led seventh and eighth graders from LBSY on a tour of the 1/6-acre garden, explaining growing seasons, composting and drip irrigation. The students also planted their own vegetable seeds, which will sprout in their classrooms before being replanted in the garden when weather gets warmer.

While the garden may seem dormant at first blush, it is actually full of maturing crops, even during winter.

All vegetables currently growing in the garden are the kind that survive, even thrive in cold weather, though most of them must be covered when the temperature drops below freezing. Fraade even snapped off some of the Kale leaves and carrot greens for the kids to sample.

The orchard, and grain plots sit beyond the garden’s fence line. While the wheat and rye have already sprouted and look like the grasses that they are; they can grow as tall as three feet by summer. 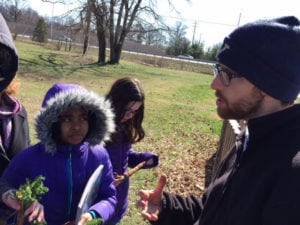 LBSY seventh and eighth graders recently toured the Community Garden at The J with Michael Fraade, being taught about growing seasons, irrigation and composting. (photo by Lee Chottiner)

Only a little of the grain will be harvested for educational purposes, Fraade said. The rest was planted to choke off weeds in the bed, prevent runoff and ultimately to be plowed back onto the ground, improving the soil quality.

It’s the first year The J has planted grains, Fraade said. “My assumption is a lot of people have never seen standing grain and have walked through the process of harvesting and processing it.”

The small orchard consists of apple, pear, apricot and plum trees. The early budding could limit the harvest this year, Fraade said, but he noted that the trees haven’t yet produced significant yields anyway.

“Last year, they produced very little,” he said. “I’m not sure if it’s due to the age of the trees or cross pollination. It’s something I want to explore a little more this year.”

He demonstrated how vegetables planted this spring will be irrigated, producing a section of plastic tubing with holes. Unlike a water can, which soaks the ground around each vegetable plant, this method, known as drip irrigation, will deliver water in measured quantities only to the crops themselves – a water savings of 50 percent.

“It was invented by the Israelis,” Fraade said. “Now it’s being used all over the world.”

He also has four bins of compostable material, which he uses to nurture the crops. The compost – decomposing fruits, vegetables and other organic matter – comes largely from J members themselves who dump it into plastic cans stationed outside the center near the parking lot.

“When we first started in November, we got about 40 pounds [of compost] that first month,” he said. “For February, we’re on track we had over 340 pounds.”

The compost contains nutrients necessary to grow food. Without it, food scraps wind up in landfills where they release methane gas, which is far more potent, heat-trapping greenhouse gas than CO2. By composting, landfill space is saved, methane emissions are curtailed and, as Fraade said, “I never have to buy fertilizer again.” 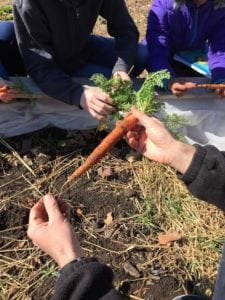 Even though it’s still winter, fresh greens and root vegetables are ripening in the Community Garden. (photo by Lee Chottiner)

Finally, Fraade showed the students how to plant their own seeds by making containers out of newspaper ­– biodegradable material. Those seed-bearing containers can then be transplanted into the ground when the weather warms.

While the garden is somewhat out sight and out of mind, its visibility suddenly spiked last September when JOFEE and New Roots partnered to open a Fresh Stop produce market in the Klein shelter. At last, shoppers were being brought to the garden gate.

“We were definitely able to use Fresh Stop to spread the word a little bit,” Fraade said.

It seems to be working. Susan Kwasny, The J’s Kindred Fellow Coordinator is organizing a Community Garden Volunteer Program, which line up people to help Fraade take care of the garden.

The program, which begins April 6 and is open to all age groups, will run each Thursday from 10 a.m. to noon.

“For the first two Thursdays we’re going to do lunch and learns,” Kwasny said. “We’re going to have lunch with fresh foods from a garden, not necessarily our garden. Then we’ll have speakers.

“After that, we’re going out to the garden,” she continued, and we’ll be working every Thursday as long as we can…. We’ll do anything from ground preparation to watering, to planting, to harvesting.”

Kwasny can be reached at skwasny@jewishlouisville.org for more information.

A show about nothing turned into something at Theatre Marketplace. The author of the book Seinfeldia, Jennifer Keishin Armstrong, along with the show’s musical creator, Louisville’s own Jonathan Wolff, told stories, showed video clips and examined the cultural impact of …

Acclaimed novelist and Israeli television producer Ron Leshem will speak on the subject, “Israel as #1 Exporter of TV Shows to the U.S.”, Sunday, April 9, 1:30 p.m., at the Chao Auditorium, Ekstrom Library on the University of Louisville campus. …