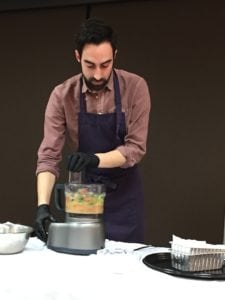 Jeffrey Yoskowitz uses a food processor to mix up the ingredients for a traditional serving of gefilte fish during a March 1 demonstration at The J. (photo by Lee Chottiner)

He especially meant that most iconic of Ashkenazi dishes – and one without which no seder table is complete – gefilte fish.

Since 2011, the New York chef, steward of Ashkenazi food culture, and drumbeater for cooking with sustainably grown foods, has been spreading the word about the recipes cooked by Eastern European Jews. To him, they are a treasure trove of healthy, hearth-warming and totally delicious eating.

His passion for these recipes led to his new cookbook, The Gefilte Manifesto: New Recipes for Old World Jewish Foods, which he co-authored with fellow Ashkenazi food enthusiast, Liz Alpern. They also run an artisanal food business called the Gefilteria.

“I associated Jewish food with my mother’s kitchen and the smell of the holidays,” Yoskowitz, 32, told a room full of Ashkenazi food fans at a March 1 cooking demonstration at The J’s Patio Gallery. “It’s the essence of who I am.”

He used the evening to demonstrate how Jews made gefilte fish for generations, mixing greens (a nod to the foraging Jews once did to enhance their diets), onions, eggs, dill and what ever fresh fish happens to be available (in this case, a mix of sable and salmon).

In addition, Chef Sasha Chack of Izzy’s Kosher Catering made borscht, herb-deviled eggs, challah and “everything spice butter” for sampling.

But gefilte fish is special to Yoskowitz, has been since Passover 2011 when he helped his grandmother prepare the delicacy.

Back then, Ashkenazi food was increasingly off the menu. Bedeviled by perceptions it was “all brown and heavy,” Yoskowitz said younger generations of Jews were passing on traditional dishes for more exotic fare from the Middle East, East Asia, India and Latin America. Meanwhile, the generation that grew up eating and cooking these dishes were dying.

Gefilte fish in particular, something millions of Jews grew up eating out of jelly-packed jars, was the “lowest of the low,” he said. It irked him that young Jews were unaware of the myriad ways it was made in the Old World.

“Those foods were no longer sexy,” Yoskowitz said.

Today, all that is changing. Cooking prophets, like Yoskowitz and Alpern, are researching the old dishes for the subtle differences in ingredients and taste brought to them by Litvak Jews as opposed to lanzmen from Galicia or Hungary. For instance, the Litvaks liked their gefilte fish not too sweet; Galicianers were just the opposite.

“We decided to write the book because we felt that we had tapped into something that inspired our peers,” Yoskowitz said. “We gave out a recipe for gefilte fish a year into the business, and many people tried to make it. They told us about it and we were so excited that a new generation gave it a try. We wanted to empower more young and old people to cook these foods.”

How gefilte fish was cooked differed even after Jews left the shtetls. For instance, Yoskowitz said Jews in Argentina generally bake their gefilte fish; American Jews poach it, and British Jews? Well, they fry everything.

Gefilte fish is cultural as well as gastronomical. Stories abound about how immigrant families would keep a carp in the bathtub. One woman told Yoskowitz that she regularly bathed with one. A childrens book — A Carp in the Bathtub — was written about two kids who tried save the fish, which had become their pet, from being the family’s dinner.

All of which gave rise to the one-liner, “from tub to table.”

Ashkenazi cooking is making a comeback, Yoskowitz said. Young people are inspired to seek their ethnic roots through the old recipes, and they’re discovering the food wasn’t as “brown and heavy” as first thought.

Many who try making gefilte fish themselves find it isn’t so hard. That’s one reason, Yoskowitz said, why he talks so much at public appearances.

“I talk so much because this doesn’t take very long,” he said.

JOFEE Fellow Michael Fraade, who brought Yoskowitz to Louisville, tried making the dish himself, “The gefilte fish was very easy to make,” he said. “I also made his cauliflower mushroom kugel and apple cake. Both very easy and very good.

Unlike people from other cultures, though, Jewish foodies are at a disadvantage. Where Irish Americans can return to Ireland to sample authentic fare — and Italian Americans to Italy, Chinese Americans to China — Ashkenazi Jews have no where left to go.

As we prepare for Passover, Jewish tradition enjoins us to consider the Exodus from ancient Egyptian slavery; not as a one-time event that happened thousands of years ago, but rather, as a recurring opportunity to fight for justice and freedom …

(Editor’s note: This is an updated version of a previously posted story, which contains new information about a Kindred volunteer program.) Within earshot of Watterson Expressway traffic, plots of young wheat and rye are growing. Fruit trees are budding, albeit …

Imagine you are leading a class of fifth and sixth graders four days a week. They speak three languages – which is two more than you do – and seem to have more energy in one day than you had …