After a multi-year absence, the Drew Corson Regional Basketball Tournament is returning to The J.

AZA teams from four cities — in the Kentucky, Indiana, Ohio region — will be participating in the two-day weekend tournament from March 11-12. The seeding matches will be played Saturday; the actual elimination games, Sunday.

Drew Corson was a Jewish Louisville teenager and an avid basketball player. He was 15 on August 16, 1994, when he died tragically on the court during the Maccabi Games in Cleveland. The next year, the tournament was named in his honor.

“The kids in Louisville take it seriously,” said Andrew Siegel, coach of the team from the Louisville AZA chapter, also named for Drew. “We know it’s not the NBA, but we like to win and all the kids are big basketball fans.”

Siegel has been involved with Drew Corson tournament off and on since his freshman year in high school. He’s been a player, a chapter advisor and now a coach. 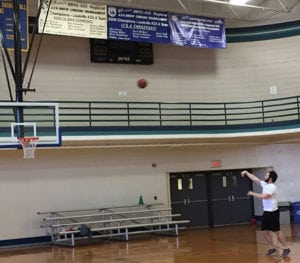 A member of the J shoots a three-pointer in the gym beneath the banners to past Drew Corson Regional Basketball Tournament champions.

“It’s fun to have a friendly competition and show what you’re made of,” he said. “It’s a really great event.”

Plus, he added, “it’s a good introduction to Jewish youth groups.”

At the height of the tournament, teams from Louisville Indianapolis, Cincinnati, Dayton and Columbus competed, the larger cities sending two teams instead of one.

For a while, Drew Corson also had a BBG competition. In fact, local BBG chapters from Louisville dominated early. Royal Blue won in 1998 – the first year of the girl’s competition – and L’Chaim BBG won in 2001.

“It’s an easy thing to say to a kid, ‘Hey, if you sign up, you get to play basketball,” he said. “It’s pretty good for getting a kid’s foot in the door; it’s a good recruitment tool.”

As for reviving the Drew Corson name in connection with the tournament, “it’s unfortunate what happened to Drew, but it’s good that the community can come together, bring honor to his name and work together for a common goal. It’s a good event and I’m glad that we’re able to bring it back.”

For Madelyn Cerra, building on the success of the PJ Library comes down to one word: programming. PJ Library is more than a children’s book that shows up in one’s mail box each month, she said. It means live activities …

Holding hands, praying for peace, parading in frigid temperatures, more than 50 of Louisville’s faith-based leaders, including several Jews, gathered at the Louisville Islamic Center on Friday, February 3 — the Muslim sabbath — to form a “circle of love” …

Since this year’s Jewish Film Festival opened with the documentary, In Search of Israeli Cuisine – a fusion of different culinary cultures in Israel – the event also included modern Israeli appetizers prepared by Izzys Kosher Catering. The well-attended event …