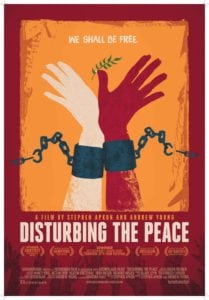 A Palestinian imprisoned for attacking Israelis with a knife watches Schindler’s List while behind bars and is moved to tears.

A suicide bomber, the mother of one, whose mission was thwarted, has a different kind of moment when she confronts a forgiving jailer whose brother was killed in another attack.

Another IDF soldier is dumbfounded when he sees that the mission of a West Bank raid is to arrest a 10-year-old boy.

All four of these people, and many others who told their stories for the Israeli documentary, Disturbing the Peace. started at the same place: They hated the other side; they suffered; they were prepared to make war.

Until they met the other side.

So began the movement called Combatants for Peace, which works to foster understanding instead of hatred on both sides of the Green Line.

Disturbing the Peace, which was part of this year’s Louisville Jewish Film Festival, tells the story of this movement.

The film was screened Thursday, February 23, at the Speed Cinema on the University of Louisville campus, drawing a hefty crowd of 117 people. Many stuck around afterwards for a discussion led by Raanan Omer-Sherman, the JHFE chair in Judaic studies at U of L.

Festival Director Marsha Bornstein said she was surprised by the turnout.

“There were people there who had never been to the film festival,” she said. “That was more important to me [because] it was a more diverse audience.”

Calling the film the most “consequential” he has seen on the subject, Omer-Sherman, himself a former IDF soldier, said it points up a serious obstacle in the quest for Israeli-Palestinian peace. The two sides don’t know each other.

Most Israelis and Palestinians can live their entire lives without really knowing someone from the other side, Omer-Sherman said. That’s despite the small size of the country, what he called “claustrophobic proximity.”

That must change, he said. “The process of truth and reconciliation is not easy. It’s tough and gritty.… Peace is hard work.”

To re-enforce that idea, the film reenacts a clandestine meeting former IDF soldiers — founders of Combatants for Peace in 2006 – with ex-Palestinian fighters. The scene was tense at first with neither side trusting the other.

They built trust by “confessing,” telling their personal stories.

Fast forward eight years. The men and women in that room were meeting as friends, doing theatrical exercises to envision a different reality than the status quo, planning peace demonstrations and rallies and dealing with setbacks in their quest for peace.

On the Israeli side, another scene shows a rally in Tel Aviv where members of Combatants are jeered by heckled by Israelis who accuse them of being “traitors.”

On the Palestinian side, a Palestinian member of the group is shown arguing with his wife over whether their daughters should come to a peace rally with him. He sees such actions as the only way to improve their lives. She sees Israel as an occupying power and believes no good can come from such demonstrations.

It’s not just misunderstanding that thwarts peace, Omer-Sherman said. It’s the leaders, too.

“We can’t always rely on our leaders to do the right thing,” he said.

Only a few audience members commented on the film. One man suggested that the English language could offer common ground to draw the two sides, though Omer-Sherman said Israeli and Palestinian activists already know the language.

Some comments were critical of Israel. One man, Russ Greenleaf, who said he is a member of The Temple and the Louisville Committee for Peace in the Middle East, called for a boycott against Israel.

“It’s the only thing the Israeli government is paying attention to,” he said afterwards.

But he stopped short of calling himself anti-Israel.

The screening marked the first time a film festival offering had been shown at the Speed Cinema, but Bornstein and Speed Art Museum Film Curator Dean Otto said it won’t be the last.

I hope to [go back],” Bornstein said. “We were both very pleased with the partnership. The cross-marketing was valuable to both us of because there were so many people who had never been to the Speed Cinema nor knew about it.”

Added Otto, “I was thrilled with the attendance. In fact, it exceeded my expectations for the first year of our partnership with the Louisville Jewish Film Festival. Marsha was a great collaborator, and I’m looking forward to future partnerships with the festival.”

NEW YORK — A St. Louis man has been charged for making at least eight bomb threats against Jewish community centers and the Anti-Defamation League. Juan Thompson, 31, made some of the threats in the name of a former romantic partner …

Just in time for Passover, Jeffrey Yoskowitz brought a timely message to Jewish Louisville: Ashkenazi cooking is cool. He especially meant that most iconic of Ashkenazi dishes – and one without which no seder table is complete – gefilte fish. …