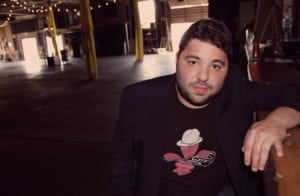 Raanan Hershberg was 13 when he stood on the bima at Congregation Adath Jeshurun reading his bar mitzvah speech and thanking his mother, “because without her, I wouldn’t be here.”

The line elicited unintended laughter from the congregation and Hershberg was hooked. Though he later regretted upstaging his twin sister, Rachel, who became a bat mitzvah alongside him, that speech launched him on his eventual career as a stand-up comedian.

Today, Hershberg, 32, lives in New York, but he tours the country delivering his own brand of schtick to live audiences on politics, religion, relationships and growing up Jewish in Louisville. He’s even a finalist in a national comic competition.

There’s something a little mercenary about the way he crafts his performances, he’ll admit.

“To me, stand-up comedy is like this: You say stuff you think is funny, and if they don’t laugh, you take it out,” Hershberg told Community over coffee at a Heine Bros. café. (He still gets back to Louisville, most recently for a gig at the Caravan.)

Actually, he said he’ll keep maybe 10 percent of his material in the act no matter how it goes over; that’s the stuff that’s just for him. The rest is for the audience.

“You’re at a focus group every night,” he said of the crowds.

Though he likes to bill himself as a “neurotic, overweight Jew from Louisville, KY” on his website, raananhershberg.com, Hershberg is a little more circumspect about his ethnicity while sipping caffeine.

“I see myself as a comedian first, not a Jewish comedian,” he said. “Chris Rock is just a great comedian, not a black comedian.”

He does, however, pay homage to Jewish comics, such as Mort Sahl and Lenny Bruce, for paving the way for what he does now.

On stage, the bearded flannel-clad joke teller has a salty delivery. Cursing is part of his routine, but not overly so. He says he can play it clean, though, and has. (He’s performed churches and synagogues.)

But when standing before an audience, he said, the comic has to be who he really is.

“It’s just the way I speak,” Hershberg said of his routine. “The cursing is just decoration. I can do clean stuff … but a lot of the comedy I do is just ranting.

Hershberg is quickly making his mark in show business. Last year, he came out with his first album Self-Helpless; he regularly opens for comedian Kathleen Madigan, and he was a finalist in last November’s StandUp NBC competition in Hollywood. The contestants performed for network executives and the winner will receive a lucrative development deal.

Though he stands behind a mic these days. Hershberg, son of Ben and Eileen Hershberg, began his career as a struggling screenplay writer in New York. When that didn’t pan out, he came home and tried his hand as a substitute teacher, which has provided some hilarious fodder for his routines.

Then one night, he took the stage during an open mic event at the Caravan, and the rest is history. He would soon host his own comedy nights at the club and tour regional venues.

“I’m sure I was scared,” he said, thinking back to that first time on stage, “but I suppose my need for attention overcame my fear.”

Even if he doesn’t win the StandUp competition, NBC will send Hershberg on a college tour, which should solidify his name with just the audience he wants to reach.

“It’s always great to appeal to young people because they’ll be around longer to buy tickets.”

It’s a fact; people are living longer, and in much better health. The question is, are social services keeping up with longer lifespans? The J is addressing that question, rolling out a new program that will help seniors eat nutritiously …

When important events occur – in Israel or around the world, nationally or locally – the Jewish Community Relations Council (JCRC) is often compelled to produce a statement in comment. Controversial actions by governments (our own or others) necessitate these …

A heartfelt week of thanks to The J members is scheduled on March 5-11 with plenty of fun activities for the entire family. The annual tradition was started several years ago as a way for The J to show its …