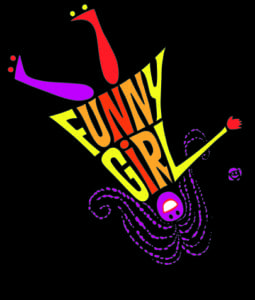 Barbra Streisand has forever been entwined with Fanny Brice, star of the Ziegfeld Follies in the 1920s, ever since she appeared in the play Funny Girl in 1964.  Like Brice, Streisand is not a classical beauty, but she fit the part with her unquestionable talent.

The play won no Tony Awards because it was overshadowed by Hello, Dolly! but it vaulted Streisand to stardom.  The movie came out in 1968 and Streisand shared an Oscar with Katharine Hepburn, who won for Lion in Winter.

CenterStage’s version runs true to form as it tells the story of “Funny Girl” Fanny Brice who becomes a different kind of Ziegfeld girl through her boundless talent and the ability to play against form.

Fanny is not classically beautiful, but she combines edginess and humor to become a star. Underlying her success is the disaster of her personal life with Nick Arnstein.  Her career soars as his crashes, ending in a prison term for embezzlement.

The play is a series of flashbacks, referencing the rise of Fanny and the fall of Nick.

For the play to be successful, Fanny Brice, played by Jennifer Poliski, must shine without being simply an imitation of Barbra Streisand. Poliski is up to the task.  She has a powerful singing voice and has the acting chops to create her own version of Fanny.

The other key performers do well: Rusty Henle as Nick; Glenna Godsey as Mrs. Brice; and John Youngblood as Florenz Ziegfeld, Jr.

But Frank Goodloe III as Eddie Ryan, Fanny’s friend and tutor, stands out.  A veteran of CenterStage productions, this part seems to be made for him.  His singing and dancing is special and his “friendship” with Fanny adds a poignant counterpoint to the romance between Fanny and Nick.

The next performance at CenterStage is Mary Poppins, March 16-April 2.

For Madelyn Cerra, building on the success of the PJ Library comes down to one word: programming. PJ Library is more than a children’s book that shows up in one’s mail box each month, she said. It means live activities …

Susan Stein has performed her one-woman play, Etty, at Yad Vashem in Israel and before the archbishop of Canterbury in England. She has reprised it at high schools, religious sites and behind prison walls where inmates have given her unique feedback …

Keneseth Israel will support an initiative to allow Conservative congregations to admit non-Jews as members. The United Synagogue of Conservative Judaism (USCJ), is expected to take up the question next month. Currently, the USCJ’s Standards for Congregational Practice restrict membership to Jews. …