Just a few weeks ago, I was asked by a reporter how I felt about a “so called” religious freedom law that is currently under consideration in Frankfort.  This law, which mirrors similar laws throughout the country, proposes to provide a defense for businesses to discriminate if they feel a closely held religious belief to do so.

In practice, it will provide an excuse to discriminate against the LGBT community, which does not have any federal protections.  It is a law that appears vaguely familiar to controversial laws passed in North Carolina and Indiana that caused businesses to boycott the state. 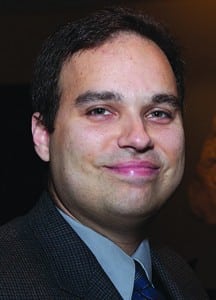 The concept of religious freedom is an important one, particularly for the Jewish community.  As a religious minority, we are rightfully sensitive to communities wishing to practice and observe their faith without any obstacles placed there by the government.  But we certainly cannot stand idly by when discrimination is legalized.

The JCRC will continue to advocate for the issues we care about, regardless of which party or which individuals have power in Washington or Frankfort.  Freedom of religion, programs that help the less fortunate, immigration issues, healthcare, poverty and — of course — support for Israel are just some of the issues we advocate for.

Postscript on Israel as we move to a new era in U.S.-Israel relations.

The last several weeks have seen a lot of acrimony between former President Obama’s administration and the Israeli government over U.N. Resolution 2334, which declared all settlements illegitimate and asked countries to distinguish between Israel pre-1967 Israel and settlements in the West Bank.  While the United States did not vote in favor of the resolution, it abstained instead of its normal veto allowing this resolution to pass.  For many reasons, we oppose this resolution. As we have stated many times, the United Nations is an inherently biased institution and U.N. resolutions condemning Israel are rightly dismissed and ignored.  Furthermore, this “victory” for the Palestinians will only encourage them to seek redress in international forums instead of negotiating with Israel, which is the only way they will have a state of their own.  For these and other reasons, we criticized the U.S. decision to abstain.

Secretary Kerry’s speech clearly showed that he is a heartfelt Zionist. He cares deeply about the future of the Jewish state and rightly called on Palestinians to recognize Israel as a Jewish state.  But the bulk of his speech was dedicated to criticizing settlements.  While we agree settlements are contentious and contribute to the obstacles to a final peace agreement, it is one of several issues that need to be worked out in a final deal.  The emphasis on this one issue again creates the impression that the onus is on Israel to make peace when, in reality, both sides will need to meet and make compromises.

We were happy to see that Congress passed a resolution criticizing the U.S. abstention.  All sides on this issue agree on the need for peace between Israel and the Palestinians, and all sides would like to see a final two-state resolution as soon as possible. But the criticism of settlements will not lead to a face-to-face meeting of the parties. In fact, it will further entrench both sides in their respective hardened positions.

(JTA) — Is terrorism softening European attitudes toward Israel? When a Palestinian terrorist used a car to ram and kill an Israeli soldier in eastern Jerusalem in 2014, the European Union urged “restraint” and, without condemning the attack, called it …

The Jewish Community Relations Council of Louisville is firmly opposed to President Trump’s executive orders that would restrict entry for refugees from predominantly Muslim countries, halt federal funding for “sanctuary cities” and expand detention for immigrants and asylum-seekers. Today, on …

NEW YORK (JTA) — The FBI and Department of Homeland Security will assist local Jewish community centers in bolstering security after 16 JCCs received bomb threats on the same day. Louisville was not one of the cities targeted by the …