Mark Lamkin may know more than most about what kind of president Donald Trump will be. After all, Trump once fired him. 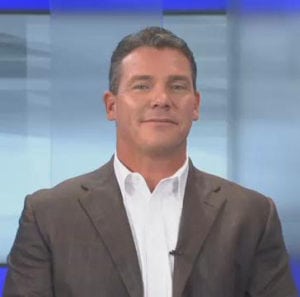 Lamkin, 47, co-starred in season four of the NBC reality show The Apprentice. He lasted eight weeks before the future president finally sacked him.

But the experience didn’t ruin him. Today, Lamkin, a Bullitt County native and University of Louisville graduate, is a successful certified financial planner who heads up his own firm, Lamkin Wealth Management.

And he seems to have relished his time on The Apprentice.

“I think I’m the only person in the room who’s been fired by the president of the United States,” Lamkin said Sunday, Jan. 8, during an appearance before the Temple Shalom Men’s Club. There, he gave his take on how Trump might affect the U.S. economy and financial markets.

Though an admirer of Trump, Lamkin said the president-elect’s stated economic policies contain points that encourage and concern him.

He supports Trump’s proposed temporary cut to the repatriation tax. U.S. corporations have sent $2.5 trillion overseas over a period of decades, Lamkin said. To bring some of that money back, Trump proposes a one-time flat 10 percent repatriation tax, provided the money is invested here. That could grow the gross domestic product; normally, the tax can be as high as 35 percent.

“If half that money comes home … it could be a real good thing for the market,” Lamkin said. “It could add as much as 1½ percent to total GDP.”

But the question of tariffs bothers him. Trump has called for a 35 percent tariff on companies that make things overseas then send them home. It’s not clear how many companies would be affected, but Lamkin said the move could have a “penal effect” on the economy, starting a trade war or even a recession.

Lamkin also disagrees with Trump on Federal Reserve Chair Janet Yellen. He likes Yellen, saying she has been good for financial markets. But Trump, who is more hawkish on interest rates, wants to see them at 3 or 4 percent.

“If he has his way, comes in and waves his magic wand, and does that very, very quickly, he’ll derail this market,” Lamkin said. “This market will sell off and sell off large.”

One of the top financial analysts in Kentucky, according to Barron’s, and a frequent guest commentator on CNBC, FOX, and WAVE, Lamkin doesn’t pretend to always get the Trump effect.

He noted, for instance that markets typically prefer divided government to avoid lurches to the political right or left, but since Trump’s and the GOP’s sweep in the November election, the Dow is up 1,632 points.

On Election Night, analysts, including Lamkin, predicted uncertainty in the market. He expected a 5-7 percent selloff. Yet the Dow was up approximately 100 points when it closed the next day.

His controversial statements notwithstanding, Lamkin thinks Trump’s ability to surround himself with smart people and make deals will win him support once he’s sworn in.

“I think he’s a master negotiator,” Lamkin said. “He starts with radical views realizing that he’s actually going to settle in the middle. I’ve seen him do it firsthand, and I think people will be surprised where he actually ends up on these issues.”

Les Abramson was at his cousin’s house in September 2015 searching for a light switch in the dark when he tumbled down the stairs. “If I close my eyes, I can still think about that sensation of flying through the …

There is a wide variety of acts for the Louisville’s Got Talent Finale on Sunday, February 26. Twenty acts were named to the Finale from the more than 50 who auditioned on Sunday, January 15. The fourth annual competition was …