One of the best ways to ensure that the Louisville Jewish community will be able to thrive in the future is to have a strong foundation program that will provide the funding that will be needed to engage future generations with the kinds of programs that will be relevant to their needs. 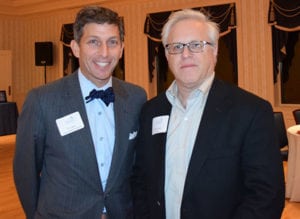 As chair of the Jewish Foundation of Louisville for the last four years, Peter Resnik has worked hard to ensure that all the pieces are in place to yield the maximum benefit for the community. Now he is passing the torch to Chris Brice to follow through, bringing all the plans and programs to fruition.

“Over the last few years,” Resnik said, “we reignited the committee.” Today, it is a really solid committee that is a mix of long-term, committee leaders and newer, younger participants. Together they will work to build for the future.

The Foundation has also been the recipient of grants designed to enhance its abilities. Recently, Louisville was chosen as part of the fifth cohort in the Harold Grinspoon Foundation’s Life & Legacy program, and the Foundation’s participation the program was made possible by a grant from the Jewish Heritage Fund for Excellence and funds from the Foundation itself.

Through the Life & Legacy program, the Jewish Foundation of Louisville will help Jewish agencies, organizations and congregations collaborate to develop and build their legacy giving. (The story about Life & Legacy that ran in the November issue of Community is available at https://jewishlouisville.org/tuvlin-named-director-federations-life-legacy-program/.)

In addition, the committee did a thorough review of all the donor advised funds to ensure that they are continuing to be used appropriately. Over the years, the community has changed. Some of the funds were designated to support agencies or programs that no longer exist today.

When the committee found funds like that, they consulted with the donors or the donors’ heirs, whenever possible, to repurpose the funds in accordance with their wishes. When no there are no family members, the committee looked at the purpose for which the fund was established and directed that the disbursements from the fund be used in a manner consistent with the original intent of the fund.

In addition, the Foundation attracted some new funds and endowments. The Foundation has two active committees, he explained. The Foundation Committee, which he chaired, deals mostly with marketing and administration. The Investment Committee is now chaired by Eric Goodman. During most of his tenure, Glenn Levine chaired that committee, and did an outstanding job. Goodman took over in the fall, and Resnik said, “We’re very fortunate to have Eric. He is an international investment manager, and we’re lucky he has chosen to continue to live in Louisville.”

Resnik believes Jewish Foundation is now positioned well for growth and he’s excited that Chris Brice has agreed to serve as chair. “I’ve known Chris for more the 15 years,” he said, “and I consider him to be a champion and educator of philanthropy. He has the financial and marketing background and he has both professional and volunteer experience” that will serve him well.”

In addition to all the administrative work that has been done, he explained, “We have a broadly respected and up-to-speed management team with Sara, Ed and Stacy,” referring to JCL President and CEO Sara Klein Wagner, Vice President and CFO Ed Hickerson and Vice President of Philanthropy Stacy Gordon-Funk.

The Life & Legacy program also means that the Jewish Foundation has the resources to market and manage legacy giving for the community. The Grinspoon and JHFE grants enabled the Foundation to invest in a Life & Legacy coordinator, and Resnik believes that hiring Jennifer Tuvlin for that position was a good move. “She will be great in that role,” he said.

A native New Yorker, he grew up on Long Island and earned his BA from Duke University in political science. He got excited about teaching during his sophomore year and was a volunteer coach at the YMCA.

After graduation, the teaching job he had planned to take didn’t pan out, so he interned on Capitol Hill and worked for the Democratic Senate Campaign Committee. Later, he landed a faculty position at the Oakwood Friends School in Poughkeepsie, New York.

Brice returned to Duke for graduate school and earned his MA in liberal studies for teaching. In 1992, he moved to Louisville “for what I though would be a two-year gig” teaching and coaching at Kentucky Country Day School, he said, but Kentucky proved to be his lifetime home. In his first hour in here, he attended a faculty party and “met my now wife, Sarah.”

He called staying in Louisville “the best decision I made.”

After two years at KCD, he worked as general manager for Maker’s Mark Products where he was responsible for coordinating the first catalog featuring Maker’s Mark promotional items.

Brice joined his family’s business, Superior Printing Ink Company, in 1996. He established a branch office in Louisville to service printers in the Ohio Valley region and he served as the national accounts manager. He also headed the re-branding effort for this eighty year-old company.

Brice returned to KCD as assistant head of school for development in 2000. During his tenure at KCD, he led a variety of initiatives related to the external affairs of the school, including fundraising, alumni relations, parent relations and admissions.

While at KCD, he developed a philanthropy class that received the National Association of Independent Schools’ highest award for curriculum development. The course “was grounded in legacy giving,” he explained. “We created a donor advised fund at the Community Foundation of Louisville and the kids would decide” where distributions from the fund would go.

Since philanthropic funds are designed for the long term, the students understood that part of the project was setting aside some funds for future classes to distribute. “We looked at the grander vision and created a vehicle to give options for the future,” he continued. Philanthropic funds are part of a healthy nonprofit.

Brice has volunteered extensively in the youth services sector of the Louisville community. His volunteer efforts are now focused on supporting soldiers and their families, especially those with a U. S. Army Special Forces battalion stationed at Ft. Campbell, KY.

He also serves on the board of directors for Where Opportunity Knox, an organization devoted to making the Greater Louisville Region the best place in America for veterans to live.

Brice has been active within the Jewish community in the past. He served on The Temple Board and coached Maccabi basketball for The J. In addition, he served as principal of the High School of Jewish Studies and director of Kesher Kentucky.

Now, he is ready to participate in the Jewish community again, and for him, the time is right. “Life & Legacy is a tremendous opportunity,” he said. In his new role, he is looking forward to supporting the participating organizations.

“It’s about having conversations with people around what they envision as a legacy of purpose and fulfillment for them,” he said. “They may have very broad ideas. They may want to support a school or other things. We can connect them to other organizations and talk with them specifically about what they want their legacy to be within the Jewish community. … I’m part of a team with Stacy [Gordon-Funk], Jen [Tuvlin] and Sara [Klein Wagner],” he said, and he’s ready to do his part.

Brice had words of praise for Peter Resnik, too. “He has really helped propel our community forward through tireless efforts to make our systems stronger and the Foundation is part of it,” Brice said. “I consider him a friend and it is a real honor to succeed him in this role. I don’t think we would have this opportunity to build our foundation if it weren’t for Peter’s good work. We owe him a huge debt of gratitude.

Brice and his wife of 21 years, Sarah, have two teenagers, Lilly and Wilder.

On Saturday, November 19, a crowd gathered at The J for an evening preview of the second annual Snowflake Shoppe. The holiday bazaar, which opened to the public on the following day, Sunday, November 20, offered a unique shopping experience …

All of us are born with a set of skills and talents. Sometimes we recognize them and pursue careers that put them to good use. Other times, we don’t discover them until later in life. “I never really knew I …