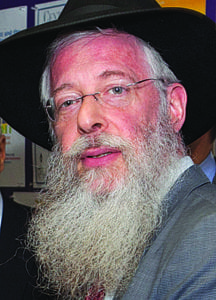 Our country has just faced a very difficult election. It was by far the most divisive election in recent history. Even now, after the democratic process has brought us a leader, there remains much discord and conflict. What guidance can be gleaned from Jewish history and its teachings?

In a recent Torah portion, (Genesis 28: 10-22) Jacob was alone on a dark mountainside. The sun set and Jacob lay down to sleep. He arranged a pillow of stones around his head and dreamed of Divine images.

When the sun rose, Jacob found that the stones had miraculously merged into one stone. The traditional explanation shared in the Medrash is that each stone was envious of the other as to which would be the one directly under Jacob’s head. So they merged into one stone and the quarreling ceased.

The answer might just be the answer to our situation in America today. When the rocks joined as one, they were no longer bothered by their individual positions, because they were all one.

The lesson is that when you and I are one, your triumph is my pride. My success is your success. More than envy breeds divisiveness, divisiveness breeds envy. More than unity creates unity, unity creates tolerance. Our national unity depends first and foremost of the shared awareness of unity between each and every one of us.

Our community has the chance to promote this type of unity and be a shining light to inspire other communities to emulate and follow. In light of this, I was so inspired recently when I was contacted by Jennifer Tuvlin who is the Life & Legacy coordinator for our community. This is a new Jewish Community of Louisville program aimed at connecting all of our community organizations with generous individuals to help secure our Jewish community for the next generation and beyond and to incorporate legacy giving within our community.

There is a story of a man who thought of a great idea to change the world for the better. He wrote the president, but got no reply. He tried writing to his senator, but received a standard “thank you for your thoughts” response. He wrote to the Mayor, but to no avail. So he gathered his family and told them in no uncertain terms that he wanted to implement change and outlined what he wanted them to do. But they had other priorities.

The man then realized that he needed to just do start on his own. His family saw his changes and they soon followed suit. Then his neighbors, and finally the entire community. He realized positive change begins with each of us singly – one person at a time.

This past week, I was leading a class at the Jewish Learning Center and we determined that unity is the key to all types of successes, both personal and communal. I decided I would make a point to do whatever I could to foster more Jewish unity in our community. I shared this idea with my family they suggested that we create a series of communal events during the week of Chanukah and invite the entire community to attend.

Or find a community-wide program at The J or at the library. It doesn’t have to be only Chanukah – there are myriads of programs which highlight unity all year long. The main thing is to unite with others and together to make our community and our world a better place for all. Make a start. Bring your family. Encourage your friends to do similar things. We can put the UNITY back into community and together ensure the greatest future for ourselves and our children. Happy Chanukah and happy 2017.

OMAHA, NE — Berkshire Hathaway Chairman and CEO Warren Buffett welcomed 43 U.S. Israel bond investors to Omaha on recently, each of whom made a minimum $1 million new investment to participate in an exclusive evening with the famed “oracle …

When the Jewish Community of Louisville was chosen by the Harold Grinspoon Foundation to be part of the fifth cohort of communities to participate in the LIFE & LEGACY program, the JCL made a commitment to partner actively with Jewish …

Lee Chottiner will succeed Shiela Steinman Wallace as interim editor of Community. A career journalist, Chottiner spent 13 years as the executive editor of The Jewish Chronicle in Pittsburgh following a long career in daily newspapers. During his tenure, the …