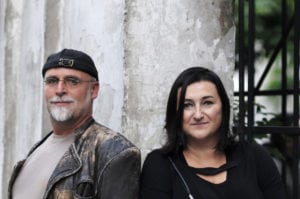 On a rainy day in Krakow, Poland, Uwe von Seltmann, a young journalist from Germany, walked the streets of the city’s old Jewish Quarter. He was in town to write a story about Krakow’s Jews, past and present, and he had time to kill before his next interview.

That’s when he saw a small synagogue. Desiring to get out of the rain, he ducked inside. There, he met someone who would change his life.

A man stood before the ark praying at the lectern. Thinking he might be worth an interview, Uwe waited until he finished davening before asking him a few questions.

He learned that the man was a Jew from London with deep roots in Krakow. He returned to the city once a year to pray for his parents whom he said had died in Auschwitz – something the stranger emphasized by twirling his hand upward, mimicking smoke from Birkenau’s ovens.

Before long, though, the man reversed roles and began asking Uwe questions.

“He looked into my eyes and asked why I was interested in Judaism,” Uwe said. He couldn’t give him a good answer – simply that he always had been.

Uwe couldn’t say. His grandfather was a taboo subject in his family; no one discussed him. Still, he had a vague memory of someone once saying he had been in the SS.

“I know why you’re interested in Judaism,” the man continued. “It’s because you feel guilty for your grandfather, for whatever he did.”

Finally, the uneasy interview took one final twist: “Do you have any Jewish roots?“ the man asked.

Impossible, Uwe thought. Even if his grandfather had been a Nazi, he would have had to prove he had pure Aryan blood going back four generations.

“You have Jewish roots,” the man said. “Believe me.”

That was in 1999. Uwe would never see the mystery man again, but that encounter in the Krakow synagogue was the start of an incredible journey for the young German.

He dug into his family’s past and discovered disturbing things. Not only had his grandfather, Lothar von Seltmann, been an SS officer, he was close to Heinrich Himmler. Uwe found photos of the two men together.

His grandfather was complicit in the 1943 Warsaw Ghetto uprising. In fact, he sent postcards to his family from Warsaw around that time, including one dated May 6,1943 in which he writes cryptically about a “special action” that prevented him from being with his wife and newly born son (Uwe’s father), in Krakow.

Ultimately, Lothar von Seltmann was accused of war crimes in 1962, even though witnesses say he probably committed suicide in 1945.

And as the man in the synagogue predicted, Uwe learned that he did indeed have Jewish roots – on both sides of his family. In fact, on his father’s side, he is descended from a Hungarian chief rabbi.

But Uwe reached the most important touchstone in his journey years later when he met his future wife, Gabi, in a Krakow café. That night, they each shared their family secrets: he was the grandson of a Nazi; she, the granddaughter of a teacher named Michal Pazdanowski, who perished at Auschwitz.

Today, Uwe, 52, and Gabi, 45, herself an artist and filmmaker, use their unique Holocaust histories to teach lessons of love and reconciliation. They have founded the Art, History & Apfelstrudel Foundation in Poland, which uses art, history and even cooking to encourage “active dialogue, unity and cooperation,” according to its website.

They co-authored, a memoir, How Love Can Heal the Past, which tells their combined stories. And they speak at schools, synagogues and other venues, retelling their stories to hundreds of people, young and old.

The von Seltmanns were in Louisville from October 22-27. They spoke at Temple Shalom, which sponsored their visit here, as well as Atherton, duPont Manual, Louisville Male, Central and St. Francis Assisi schools. They also met separately with Holocaust instructors, and Jewish pupils from the High School of Jewish Studies and Louisville Beit Sefer Yachad.

Their message to their audiences was simple: “make love, not war.”

To be sure, Gabi, who also has Jewish relatives on her father’s side, was angry when Uwe first told her what his grandfather had done, but she wasn’t angry with him. “I was angry that, 70 years after war, they are still close to us – the shadows of the past.”

And, according to her, she was angry that this meeting might force her to face her own family history. Until that night in the café, she said, she had never even visited Auschwitz.

“I knew this was the moment when I must face all these stories,” Gabi said. So she did.

With Uwe at her side, she traveled to western Ukraine – Poland before the war – where her grandparents lived. She learned many things about them; she even met an elderly woman who, as a teenager, left food outside her grandmother’s home so she, and her children, wouldn’t starve after her grandfather was taken by the Nazis.

Gabi already knew about her great uncle, imprisoned in Dachau, who came home traumatized. She said he used to keep dried bread in his pockets and under his pillow so he would always have food close at hand.

Her journey taught her that war destroys lives far beyond the generations that actually experience it. “We are three generations after the war,” she said of herself and Uwe. “Look how many generations it takes to come back to a normal life.”

As for Uwe, he grew up estranged from his father, an orphan at 2, who rarely showed his son love. But Uwe’s dislike vanished after he researched the family story. He learned that his grandparents had children, not out of love for kids, but as “gifts for the führer” – future soldiers and pure blood Aryans.

He finally understood that his father, who is still alive, couldn’t show him love because he had never known love himself. “I lost all hate for my father,” he said, after discovering how difficult his childhood had been. “So we are able to create the future together. We had to get quite old together, but better late than never.”

Today, the von Seltmanns live and work in Krakow. Though neither has converted to Judaism, they are active members of progressive synagogues in a country where many Poles are just now discovering their Jewish roots.

They urged their audiences to take their own family journeys, even if it means asking disturbing questions about the past. Learning the truth, they say, is liberating, and can put the past to rest.

Besides, Gabi said, “the more you don’t talk, the more things come out, and at unexpected times.”

This month, Jewish Hospital and University of Louisville Hospital honored Veterans Day with a special tribute of a four-man color guard who did a presentation of colors provided by the Jeffersontown Legion 244, organized by our department of diversity and …

Donors who attended the 2017 Federation Campaign Major Gifts Dinner on Sunday, November 6, came away with a message of progress, change and hope, and they responded by increasing their gifts five percent over what they gave last year. Jewish …