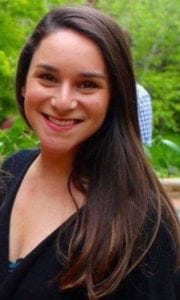 Kari Semel has joined The J’s staff as teen director and she began her many-faceted job with the immersive experience of helping Louisville’s 2016 Maccabi team when they competed in the games in Cleveland.

The games were a great way for Semel to get to know some of the teens she will be working with and to work side by side with Assistant Director of youth Services Mike Steklof. “I had such a great time,” she said, and she already has ideas to grow next year’s delegation from suggestions she collected from uniforms to organizing teams for different sports.

This year, Louisville’s J had a basketball team and individuals who competed in several sports.

For Semel, this job at The J is her first full-time position after graduating from DePaul University in Chicago with a BA in sociology. From the first call from Steklof, she felt comfortable with the position and excited to hear about the opportunities it presents.

As teen director, she will wear many hats. She will be a program supervisor at The J Camp, the delegation head for the next Maccabi games and she’ll run BBYO and Teen Connection. These are just a starting point, however. One of the things that attracted Semel to the position is that all the details were not yet nailed down. “They were waiting to see what my strengths were before defining the role, which made it feel like they were invested in my abilities,” she explained.

Originally from Cleveland, she grew up as the middle child of three girls in a family that is involved in the Jewish community. Her mother, Jessica, runs the public education initiative through the Cleveland Federation that includes a tutoring program for students in inner city schools, summer feeding programs and other food programs. Her father, Alan, is president of the Board at The J there.

Her family belongs to Park Synagogue, a Conservative shul; and growing up, Semel attended Hebrew School there. She participated in Junior Mitzvah Makers and spent about five years as a teachers’ aide three days there. “I loved doing whatever I could and being part of that community,” she said.

In high school, she was a member of Chaia BBG in Cleveland and served as chapter president. She also acquired leadership skills by attending a Chapter Leadership Training Conference.

At the Cleveland JCC, Semel went to Camp Wise for 12 summers. She has a love for acting and singing, so she participated in the youth theater program, Playmakers, and performed with an a cappella group in high school. She’s also a big Cleveland Cavaliers fan.

Before college, Semel took a gap year, spending half a year teaching English at an orphanage in Ghana and half a year on a Masa program in Jerusalem, Israel. On Masa, she worked with the Ethiopian National Program, mostly writing grant applications, and taking classes. “I loved my time there,” she said. “It was an incredible opportunity.”

During her college career, Semel was active in Chabad and Hillel, which work together at DePaul University, participating in weekly Shabbat hosting events, challah making and more.

Recognizing that Louisville has a strong BBYO program, Semel wants to start with it where it is and make it even stronger by introducing more events, including some less structured events. She also wants to set up shadowing programs for new members and future leaders and “to help Drew Corson AZA reclaim the basketball tournament title.”

She’s also looking forward to learning more about Teen Connection and ensuring that it gives them a taste of what BBYO is so they’ll look forward to the transition.

Next time you’re at The J, stop in to say hello to Kari Semel and welcome her to Louisville.

Fourteen teenage athletes, ranging from ages 12-16, represented the Jewish Community of Louisville at the JCC Maccabi Games in Columbus, OH, July 24-29. Team Louisville brought back nine medals from this year’s Maccabi Games, but as always, the teens learned …

Craig Melvin, national correspondent on NBC News’ TODAY and anchor on MSNBC, will host the Fourth Annual Muhammad Ali Humanitarian Awards on Saturday, September 17, at 6:30 p.m. at the Marriott Louisville Downtown. Six young humanitarians from around the world, …

The City of Louisville takes pride in being a compassionate city, a warm and welcoming place that immigrants from around the world and their descendents call home and where they can share and take pride in their heritage. To showcase …