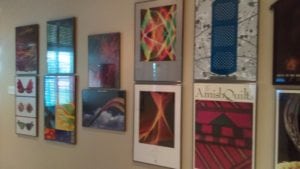 To artist Julius Friedman, there is only one thing more important than art and family, and that is hugs. He made sure it was a part of his 50 year retrospective at the Frazier Museum.

“When I went to my open the other night, I said to look at the person to your left or right or behind you and give them a hug. It will be good for you and good for them.” Friedman believes hugs are underrated. “It’s taking the time to look at someone, and size up that person.”

Looking at, and sizing up Friedman can be quite interesting. The Louisville native prides himself on thinking outside of the box, and it’s that kind of introspection that has helped shape much of his artistic career. A good portion of his work is currently on display at the Frazier Museum in downtown Louisville, called Julius Friedman: Fifty Year Retrospective.

“When they asked me to do it, I was thrilled. How do you celebrate a body of work? I wanted my grandchildren to see it in one swoop, 50 years of my work. [But] I wanted to do more.”

Friedman’s work includes 230 of his posters, including his iconic “French Horn filled with Ice Cream.” He celebrated it by getting area school children to re-enact the poster. It took them three minutes and 40 seconds to fill a real horn with ice cream. But when it came to his retrospective, Friedman decided just showcasing his famous posters was not enough. He wanted people to do more than just look at the exhibits.

“I’ve never done a video before,” Friedman said. “I wanted this thing to showcase energy and rebirth. I also wanted people to walk through a fabric. I wanted more than photographs on a wall.”

So Friedman, who has always loved nature, chose water as the subject of a four minute film he created. He also decided to hang long pieces of fabric from the ceiling that people could walk through and touch while exploring his work.

“Yesterday a gentlemen came up to me with his five-year-old daughter. He said my daughter loves your show. I’ve never seen her get so excited walking through the material. She started dancing and rolling on the floor. That’s the kind of response I’ve gotten the last month.” Friedman adds, “I’ve watched people interact and feel things, rather than just (passively) seeing them.”

Friedman says his three room multimedia retrospective, complete with films, posters, books, cubes, broken glass and hanging material, has far exceeded his expectations. “We’re a sum of all our experiences”, Friedman tells me. “Most people go from point A to point B, without thinking much about the journey. For myself, the journey is equally as important as getting there. My inspiration comes from just looking and from nature. Nobody has done a better job creating than whoever that supreme is.”

Even though he works hard creating and displaying works of art, when asked about his profession, Friedman says it’s more like an obsession. “It is why I mentor so many children. We didn’t have art in our house [growing up]. I am blessed, having been self-employed my whole life.”

For Friedman, money has never been a motivating factor.

“While my friends were making money in advertising, I was in my own studio. My friends would tell me that I get to do all the fun stuff.”

Friedman has always looked at the world through a different lens. He was born and raised Jewish, and while he has pride in his background, he has his own philosophy about religion and life.

Tolerance and respect, along with posters, cubes, fabric, films, books and philosophy, are all on display through October 9 at Friedman’s fifty year retrospective. He hopes people enjoy his work, but even more so, he wants viewers to keep their arms open and empty, ready for a hug.

“I hope I touch a few people with my art. When people ask me what is my favorite poster, I always say the next one. Doing what I do, I hope I touch someone in a positive way, starting with a hug.”

Friedman goes to the Frazier Museum often. So the next time you happen to be there, and a gentlemen approaches you asking for a hug, don’t be shy or afraid. You might just be hugging one of the foremost creative experts in the Bluegrass and beyond.

I am delighted to announce that in the new academic year, the program of Judaic Studies at UofL will be offering three new courses never previously taught. The first of these, HUM 561-02: Jewish Identity in Graphic Novels & Comics, …

As the temperatures dipped into the 60s this week, the State Fair opened and the new school year started. It is also time for the beginning of the 2017 Federation Campaign; and the Women’s Philanthropy Division is taking the idea …

Pizza for the Pantry, the annual fundraiser for the Sonny and Janet Meyer Family Food Pantry Fund, has proven to be as popular as ever. The fourth annual all-you-can-eat lunch event was held on Sunday, August 21 at Wick’s Pizza …