Just weeks after being named to the United Soccer League Team of the Week for his two goals against Toronto FC II, Community caught up with Israel native and Louisville City FC midfielder, Guy Abend.

We first met Abend last year when he joined the new LCFC club team. This time, we wanted to find out how his first year in Louisville was treating him.

During one of the team’s final practices before welcoming the Charleston Battery at Louisville Slugger Field, Abend was suited up and working on finishing with the team. 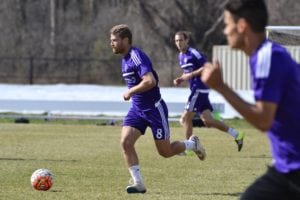 Each of his teammates did this repeatedly until head Coach James O’Connor blew the final whistle and Abend jogged over to me.
With a sweet smile and humble reserve, he greeted me, reluctant to shake my hand because his were “sweaty.” I asked him how Louisville had been treating him since the last time The J interviewed him just over a year ago.

“Louisville has been so warm and welcoming throughout my time here. Everyone is friendly and kind to me,” Abend said.

Last year, the Netanya, Israel native had plans and goals he hoped to achieve throughout the year.

“When I moved here, I really wanted to go to school. I’m proud to say I’m taking classes online from The Open University of Israel,” he said. “I plan to major in Business Management.”

Traveling as far as Toronto and all the way to Orlando, being in season and studying can make finding down time tough for Abend, but he says it’s not impossible.

“I always find time to draw. Anything, I just love to draw. It’s sort of my escape, if you will, from soccer,” he said.

For not being here for very long, Abend has managed to make several Israeli and Jewish friends.

“I met Louis Waterman here. He’s been a great local mentor for me here,” he said. “I also know a good many Israeli and Jewish guys here, so we always find time to cook dinner every Friday, speak Hebrew together and such.”

But don’t be surprised if you see him around town at some of his favorite restaurants. He’s more than happy to say hello.

“I love Taco Luchador, Mussel and Burger, Hammerheads and Sapporo. Those are probably some of my favorite restaurants in town,” he said.

A little more than half way through the season, LCFC sits atop the Eastern Conference with 11 wins, one loss, and five ties. Abend’s goal? Well, it’s very achievable.

“I want our team to win the division and continue to do well,” he said. Long term, however, Abend hopes to branch more out into the coaching and teaching.

“I’ve trained kids a bit at the JCC, but I hope to be able to do more of that and to teach Hebrew,” he added.
Catch LCFC as the team returns home Saturday, July 9, at 7:30 p.m. Don’t forget to look for the guy in the number eight jersey. For ticket information, visit http://louisvillecityfc.com.

There were two new musicals that made auspicious debuts on Broadway in 1957. One was The Music Man, a traditional story of love between a bunco artist named Harold Hill and Marion a local librarian in a small town in …

THE CHOSEN ONES Steve Sem-Sandberg; Anna Paterson, trans. Farrar, Straus and Giroux, 2016 Hardcover. 576 pp. $27.00 ISBN: 978-0374122805 The fact that Austria recently very nearly elected a far-right candidate who boldly flirted with the iconography and language of the …

WASHINGTON, July 3, 2016 (JTA) ­– Elie Wiesel, the Holocaust survivor and Nobel laureate who became a leading icon of Holocaust remembrance and a global symbol of conscience, died Saturday, July 2, at 87. His death was the result of …