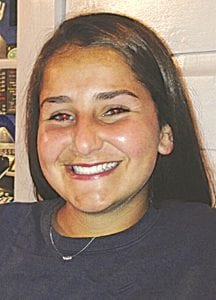 The 2016 Ellen Faye Garmon Award will go to Abigail Geller. The award, which recognizes an outstanding BBYO leader, will be presented at the Jewish Community of Louisville’s Annual Meeting on Wednesday, June 15, at 6:45 p.m. at The J.

“I am very excited to win the Garmon Award,” she said, “and also thankful because the award will be very helpful.” She will use it to help defray the costs of going to BBYO conventions. She also hopes to attend Chapter Leadership Training Convention next year.

Geller is completing her sophomore year at North Oldham High School, where she plays field hockey, is a member of Beta Club and serves on the Student Advisory Board.

When she was in the eighth grade, Geller decided to try BBYO. “My mom encouraged me,” she said, “and my Jewish friends were doing it.” Her cousin, Izzy Geller, was also involved. It turned out to be a good decision.

Geller began attending chapter meetings and conventions but was reluctant to take on the responsibilities of a chapter board member. As she attended more meetings, she came to enjoy it more – especially the local activities.

The time soon came when she chose to run for a chapter office. “I wanted to get more involved,” she explained. “I felt like I was benefiting, but I wanted to benefit others.” With encouragement from her grandfather, Harry Geller, and her cousin, she settled on gizborit, fundraising vice president, a post she has now held for two terms.

In this capacity, Geller organized a bake sale and a restaurant fundraiser and had sales of spirit-wear, pants and T-shirts, among other things. The biggest fundraiser was a Kizito frozen cookie dough sale. As a result of her efforts, Jay Levine Chapter’s reserves have doubled.

For her, the most exciting part of the job is the opportunity to be creative. For example, she designed a sticker that the chapter sold at a convention.

As her leadership skills grew, Geller stepped up to do more, reaching out to other members to figure out how to do things better, ensuring that all parents are receiving emails and helping other Board members when she can.

In addition to BBYO and school activities, Geller is an artist. Last year, she was in the National Art Honor Society. Currently, she is doing three-dimensional art focusing on sculpting with wire and plaster.

She is also a madricha at Louisville Beit Sefer Yachad, doing a variety of jobs to help the teachers.

For the past two summers she has gone to Beber Camp. This summer she will be traveling with her camp friends to Poland and Israel.

She is the daughter of David and Betsey Geller and has two sisters, Sydney and Hannah. Her grandparents are Harry and Annette Geller and Alan Zemon and Colleen Cohn.

The Ellen Faye Garmon Award
Ellen Faye Garmon was involved in Jewish life through BBYO, the Jewish Community Center and in the general community. The daughter of Estelle and Selwyn Garmon, Ellen died in a tragic accident July 1968. At the time, the Gamma Kappa Social Club, of which she was a member, established an annual award in her memory to help further the work of high school students who shared her spirit and the ideals that were important to her. The award is given annually and is funded through the sale of all-occasion cards.

Whether you have one 18-month-old baby or five older children, with activities to pique every interest, The J membership is your family’s one stop shop. From theatre, to parent’s night out, to sports and pools, families have every opportunity to …