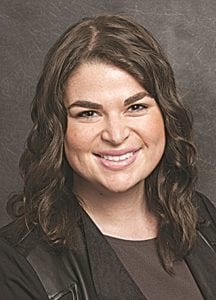 Louisvillian Emily Benovitz now makes her home in Washington, DC, but it is evident the values she learned from her parents, Amy and Lee Benovitz, particularly the importance of volunteering and being active in the Jewish community have stuck with her. Benovitz has been named the recipient of the Jewish Federation of Greater Washington’ 2016 Jerome Dick Young Leadership Award.

The Jerome J. Dick Young Leadership Award recognizes individuals in their early 40’s or younger, who exhibit the following qualities:
• A willingness to undertake and carry out responsibility;
• A demonstrated financial and emotional commitment to Federation;
• Capacity for leading and motivating people;
• Involvement in Federation, agencies, and community activity; and
• Potential for future leadership in additional areas of Federation and community life.

Benovitz moved to Washington seven and a half years ago, immediately after graduating from the University of Michigan. She is the program director at the U.S. Global Leadership Coalition, an organization that is active in DC and around the country.

Its mission is to strengthen America’s leadership in the world through development and diplomacy programs. It is a network of over 400 businesses, non-governmental organizations (NGOs), foreign policy and security experts, who support strategic investments abroad.

“I’m responsible for programs and events in DC and around the country,” Benovitz explained. “We do hundreds of events a year, from small dinners with high level administration officials in DC, to 500- to 600-person events around the country, an annual conference and a 1000-person gala dinner.”

Her involvement with the Jewish Federation of Greater Washington started about five years ago. “I was selected to go on a trip to Israel sponsored by the Federation,” she explained. “It was a Birthright alumni mission and leadership mission for young professionals in DC.”

Upon returning home, participants took part in an impact project to help better and connect with the community. “That’s where it started for me,” Benovitz said. “I had a job that I loved and had made good friends. I was ready to take the next step here.”

Benovitz helped found Mitzvah Mavens, which has become one of the Federation’s signature programs. “That’s not surprising with my history and my mother,” she said. Here in Louisville, Amy Benovitz established the Merry Mitzvah program and is always coordinating volunteers for a variety of Louisville non-profits.

Emily Benovitz’ Mitzvah Mavens is a multigenerational group of women – young professionals and seasoned volunteers – “who get together to form mentor and mentee relationships and do good deeds around the community.”

“I was on that committee,” she continued, “and from there became involved in all sorts of other events and committees at the Federation. Soon I was on the Young Leadership Board.”

There is a strong focus on the young leadership cohort in Washington. There a seats reserved for young leaders on committees and boards, and, she said, “a lot of mutual excitement between veterans and young leaders.”

“I just kept saying yes to everything that was asked of me,” Benovitz added. “I chaired a mission the next summer and took a lot of leadership positions. I was asked to be co-chair of Young Leadership, for the past two years and have served on the Board of the Jewish Federation and the Executive Committee. I’m only the second young leader to serve on the Executive Committee.” She is the vice president of Young Leadership.

“It’s a lot,” she said, “but I’ve met fabulous people in the community and it allows me a lot of opportunities that I said yes to. I was surprised [by the award]. I didn’t think I did anything special. I was doing my duty and something I enjoy.”

The Dick Leadership Award will be presented at the Washington Federation’s Annual Meeting on June 1, and Benovitz is excited that her parents will be there with her.

Take a moment to remember three of your favorite childhood experiences. Chances are good, one or more of those cherished memories includes Summer Camp. In the Jewish community, Summer Camp seems to be the tie that binds. And, here at …