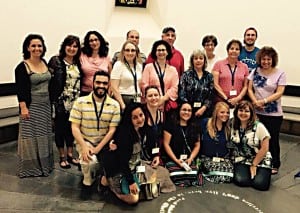 Five local Hebrew school teachers traveled to the Western Galilee this summer as part of the Partnership2Gether Twinning program for educators. Amy Danino, Rachel Goldman and Karen Feder from Louisville Beit Sefer Yachad; and Bernard and Marilyn Pincus from The Temple Hebrew School joined 10 others on the trip, which introduced them to the Israeli way of educating children.

The teachers have been a part of the twinning program before, but had never been on a trip to Israel specifically for this purpose.

“We’re still high from it and it’s been three weeks,” said Karen Feder. “It was so good; it was such a great trip. We’ve all had Israel experiences before. This wasn’t the first time for any of us. But there are things we did while we were there that we had never experienced before.”

Bernard Pincus was on his first trip to Israel, however, and had similar good things to say about it. “It was a series of enthralling high points,” Pincus said. “Coming into Israel and flying over the coast was an emotional experience that will stay with me forever.”

Danino, who has lived in Israel before, was very excited about her experience on this trip.

“It’s like putting different lenses on,” she said. “We spent so much time in the classroom and experiencing the kids and the educators and how their education system works and how we can take our Hebrew school system and kind of connect with them and figure out where the similarities are and how they can help us and we can help them.”
The LBSY teachers said they plan to incorporate so much of the visit to their classrooms.

Danino just finished her master’s degree in elementary education. She said this trip was particularly eye-opening. “The way that the education system is set up there, the kids don’t have the pressures [that American children do],” she said. “The spirit is different. The kids are so much happier there. They’re running around, playing soccer between classes.”

“Or just taking a sandwich and sitting out on the grass,” Karen Feder added.

Danino continued, “At one school we went to, 80 percent of the kids play a musical instrument.”

“The teachers there said they are under a lot of pressure to push STEM (Science Technology Engineering and Mathematics), but they just don’t worry about it. They said, ‘The kids need this (music), so this is what we give them,’” Karen Feder added.

She said she met with a school director that she will twin with this year, which is at a naval boarding school. She teaches eighth grade.

“The important thing for eighth grade is for them to kind of understand the political side of Israel,” Karen Feder said. “The history of Israel, and being able to learn those things from kids that are pre-military but are definitely in that path of the navy, and they can really learn a lot from each other. One of the things I want to teach this year is to try to instill that Zionist love of Israel that they don’t get here if they’re not exposed to Israel a lot. Israel could be any country to them. It could be England or it could be France.”

She added that part of the reason for American Jewish children’s distance from Israel is that they have never lived in a world without it. While Jews in the United States today suffer much less anti-Semitism – a good thing – they don’t feel a connection to Israel as Jews of previous generations did. “You kind of lose that sense of who you are,” Danino said. “Because you don’t have to connect to each other.

“Hebrew school is separate from daily life,” Danino added. “You go on Wednesdays and Sundays, but a lot of these kids are not necessarily Jewish outside of their synagogues or Hebrew school, especially once they get into eighth and ninth grade, when they hear a lot of the political anti-Israel stuff. They need that foundation in being proud of who they are, and to be knowledgeable and being very clear and being able to stand up for Israel.”

All of the teachers said they also made connections with American teachers from Central Consortium communities. The LBSY teachers made friends with four Hebrew school teachers in Indianapolis who are Israeli, and they intend to keep in touch and find ways to connect their students. Pincus connected with a teacher from Toledo, and they talked about the different ways that they teach their students.

The trip itself was also different from what they’ve experienced before.

“The tour guides were fantastic,” Goldman said. “The light that they brought through their own eyes, and how they showed us what they liked, too. And everywhere they went they wanted to feed us!”

The group met with a local mosaic artist in Acco who took them into his home. He had the teachers create mosaics of Hebrew letters, and the Louisville teachers opted for the letter lamed. They designed it with a fleur de lis to represent Louisville. The mosaics will be part of a larger scene on a wall in a children’s garden. The Pincuses visited a couple of kibbutzim where they had friends. His twinning teacher’s husband ran the dairy operation of their kibbutz, and another friend lived in a kibbutz that makes cardboard boxes that are used throughout Israel.

All of the teachers who went are very charged up and eager for their school year to start. They plan to talk about their trip with students and continue the bond the children already have for Israel in the classroom.

Rabbi David Feder, director of LBSY, said the trip will help with goals that the school has for the future of its students.

“When we have our teachers involved in the twinning program,” Rabbi Feder said, “it helps our teachers make better connections to Israel, which helps in the students’ maintaining their Jewish identity, sharpening their Hebrew skills and understanding their roles in a broader Jewish world.”
Danino was ready to instill all of that into her students, and work to get the students to Israel someday.

NEW YORK – The critically acclaimed narrative feature film Runoff by Louisville native Kimberly Levin will premiere simultaneously in Louisville and Lexington on July 24. Produced and filmed entirely in Kentucky, Runoff is coming off a successful opening in New …

On Tuesday, July 21, we received an unconfirmed threat. The JCC emergency procedures were followed to evacuate the building. Everyone was evacuated quickly and calmly, no one was ever in danger. Our new ramp made the evacuation run smoothly especially …