Each year, the needs of our Jewish communal agencies exceed the dollars available from the Annual Federation Campaign. For the 2015-16 fiscal year, requests for funding totaled $2,280,720. While the Campaign raised more money this year than last, the community had only $1,926,000 to allocate – just 84 percent of the funds needed.

That means difficult choices have to be made, and those choices fall to the Jewish Community of Louisville’s Planning and Allocations Committee, chaired this year by Leon Wahba. 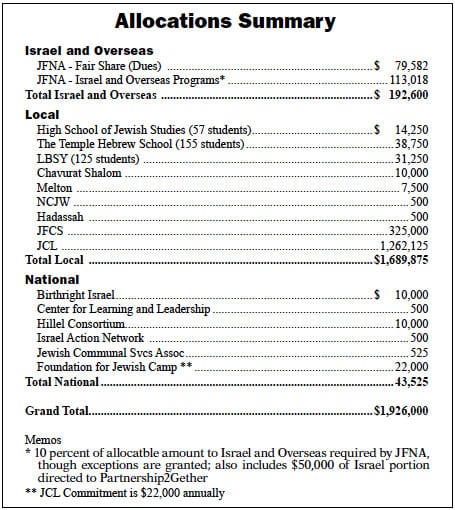 When this year’s Campaign closed, $2.1 million had been raised. That total included $41,000 that was received from the 2014 Campaign above the amount that was allocated last year, less $5,500 the Board had already allocated. This enabled the Planning and Allocations Committee an additional $71,000 to allocate this year for a 3.8 percent.

The difference between the amount raised and the amount available to allocate is a set-aside to cover unpaid pledges. If more money comes in than what was allocated, it will be added to the money available for allocations next year.

The committee, Wahba explained, is made up of a cross-section of the community. It is balanced with respect to age, gender and congregational affiliation and they work well together for the good of the entire community.
This year’s committee, in addition to Wahba, included Vice Chair Jon Fleischaker, Harry Geller, Lance Gilbert, Jane Goldstein, Ralph Green, Dennis Hummel, Elizabeth Kaplan, Joy Kaplan, Paul Margulis, Ellen Rosenbloom, Leni Sweet and Jacob Wishnia. The recommendations of the Planning and Allocations Committee were reviewed and approved by the JCL’s Finance Committee, Executive Committee and the full Board.

Although the allocations process takes place in the spring, the Planning and Allocations Committee works year ’round. “We meet with each recipient agency twice a year, to check on their progress, ensure they are true to their mission and to see where else we might be able to help,” Wahba explained.

During the allocations process, each recipient agency presents its funding request for the new fiscal year, make its case for its request and has the opportunity to answer questions from committee members.
After serious deliberation, the committee agreed to limit Louisville’s allocation to Israel and overseas “to 10 percent of the Campaign total” in keeping with Jewish Federations of North America’s (JFNA) requirements. The allocation of $192,600 is just 71 percent of what had been requested, but is an increase of $2,600 over what was allocated last year.

The Israel and overseas allocation, channeled through JFNA supports the Jewish Agency (JAFI), including Partnership 2Gether; the Joint Distribution Committee (JDC); and more. “We lament our inability to direct more monies to Israel,” Wahba said, “but stand by our belief that our community’s needs take priority. And that Israel, today, is better served by our funding more adequately our JCRC [Jewish Community Relations Council] and its Israel advocacy programs” and Hillel, which helps college students address anti-Israel and anti-Jewish encounters on college campuses.

This year, the Planning and Allocations Committee also sent a recommendation to the Endowment Investment Committee asking it “to consider directing an additional $50,000 of our [the JCL’s] investments toward Israeli equities.

The committee usually spends a lot of time discussing the allocation to the schools. Most Jewish communities do not invest Federation Campaign dollars in synagogue religious schools. “In fact, the JCL is just one of six communities our size [in the country] that directs dollars to synagogue religious schools,” Wahba said. When it comes to the percentage of Campaign dollars allocated to those schools, Louisville has the second highest allocation.

This year, the committee continued past policy and funded Louisville Beit Sefer Yachad, The Temple Religious School and the High School of Jewish Studies at $250 per student. As enrollment has dropped, those allocations decreased proportionately, and the total allocated to the schools is $9,500 less than last year.

Recognizing the nature of the services Jewish Family & Career Services supplies and that the demand for counseling, career services and help with other needs continues as our nation recovers from the recession, the committee allocated $325,000 to the agency, 96 percent of what it requested. This is $16,000 more than what JFCS received last year and is a five percent increase. The Committee allocated $1,262,125 to the Jewish Community of Louisville, just 86 percent of the amount requested. This is a 5.6 percent increase over what it requested last year, and is less than what used to be allocated to the Federation and the JCC when they were separate agencies. This level of support “makes it a real struggle at the JCL to accommodate our constituents,” Wahba said.

Funding for the JCL supports scholarships for camp and other programs for families that could not otherwise afford the fees; the Hillel program for college students; the JCRC; teen programming, including BBYO, Teen Connection and J-Forty Fivers; the Senior Adult Nutrition program and other mission-based programs.

Noah Rothbaum sat signing copies of his book The Art of American Whiskey at the Evan Williams Bourbon Experience drinking out of a whiskey glass that said, “Drink Kentucky Bourbon.” But Rothbaum’s love of whiskey started much longer ago and …

For 31 years, Marsha Bornstein has worked at the Jewish Community Center, and for the past 10 of those years, she’s headed up the Louisville Jewish Film Festival. But recently, she got a taste of what it feels like to …