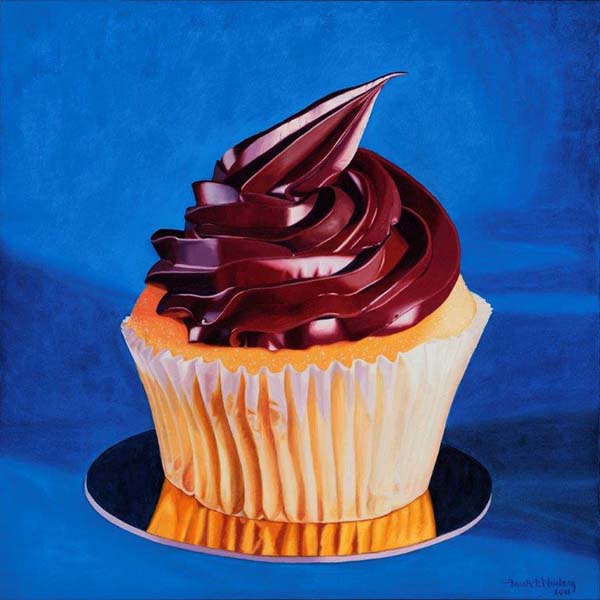 When you walk into the JCC and turn your head to look into the Patio Gallery, don’t be surprised if your mouth starts to water as your eyes take in a baker’s dozen of tantalizing desserts that pop off Frank Weisberg’s cobalt blue canvasses, almost inviting you to take a bite.

Weisberg, a successful real-estate agent and businessman, began painting when he turned 40 in 1982 and has created four major series, the most recent of which is the Dessert Series.

His first series, the Closet Series, came about while he was studying painting with his mentor, Mary Louise Schrodt. When he was casting about for something to paint, Weisberg came across a photo of Johnny Carson’s living room in Architectural Digest. Above his fireplace, Carson had a painting of a plain blue polo jacket.

“I showed it to her [Schrodt], and said, ‘if I could ever paint something like this, I’d be in heaven,’” Weisberg said. “She said, ‘well, you have the ability to paint that now.’”

Weisberg got out his camera, took a lot of photos of a jacket from his closet, and finally settled on one that he liked. “When I finished painting it,” he said, “I just fell in love with it and I wanted to do another and then another.”

As the collection grew, it became the Closet Series, all done in heroic style (larger than life), and led to his first exhibition – where else? In the Patio Gallery, of course.

After several years, prompted by his wife, Barbara, to try to paint something else, Weisberg teamed up with a woodworker in his art class to paint clothing on wood, cut to the exact shape of the garment in trompe l’oeil style – the exact size painted realistically to “fool the eye.” The completed pieces were painted so they seemed to be hanging on wooden hangers and even has a real hook to complete the work.

After working seven or eight years on Closet Series II, once again prompted by Barbara, Weisberg returned to painting in heroic style, but shifted his subject matter to portraits of fruit, vegetables and flowers. He devoted 10 or 11 years to his Still Life Series before turning to desserts.

Weisberg likes painting everyday objects. You won’t find fancy clothes or elaborate still life arrangements. “The same with desserts,” he said. “There were some beautiful desserts, some French desserts and chocolates, but I wanted things that everybody’s already eaten.”

Weisberg has not been interested in selling his work, but within the last 12 months, he started a company to produce giclées, state-of-the-art digital images printed on canvass that are difficult to tell from the original paintings. “I’m doing very limited editions of 49,” he said. “That is. Once the 49th one in a series is done, then I won’t do any more exactly like that.”

Information about purchasing giclées is available in the gallery.

In addition to the show in the Patio Gallery, three pieces from Weisberg’s Closet Series II are part of a group show at the Kentucky Museum of Art and Craft called Food, Shelter and Clothing, and he will be participating in the Gold Coast Art Fair in Chicago later this summer.

So, stop by the Patio Gallery for a glimpse of cupcakes, chocolates and fruit, most of which are available at Whole Foods, and don’t be surprised if you leave with a craving for a doughnut.

Do you remember the first live play you ever saw? For me, it was Hello Dolly in downtown Chicago. The theater seemed so big and when the actors came onto the stage, their costumes were dazzling and the spectacle was …

As she showed campers pictures of the Israeli flag and the symbols of the Israeli Defense Force and the the city of Jerusalem, Noga Peled inspired a sense of wonder and learning in children who may not know about the …

Drew Corson AZA and Jay Levine BBG finished their term strong with their end of year events. Jay Levine BBG held its third annual chapter convention from May 30-31 at Hawthorne Suites. During the event, the girls inducted their newest …