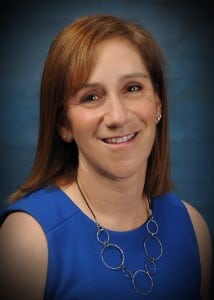 From Karen Abrams, Jewish Community of Louisville Board Chair

On behalf of the Jewish Community of Louisville, I am so pleased and excited to announce that Sara Klein Wagner will be our next President and CEO. Sara brings years of professional experience to the JCL.

Sara moved back to Louisville in 1990 to become the Community Relations and Young Women’s Campaign Director at the Jewish Federation of Louisville. Her career in the Louisville Jewish Community for nearly 25 years has provided a breadth and depth of experiences including Campaign Director, overseeing Planning and Allocations, Women’s Philanthropy, Israel Emergency Campaigns, planning and leading many missions to Israel and Leadership Development. For the past four years, Sara has served as the Senior Vice-President and Chief Operating Officer of the JCL, which included responsibility for the day-to-day operations of the JCC.

The JCL Board of Directors recognized that Sara will bring both her development experience and JCC experience to serve our community well. In fact, it was obvious to the board that the ideal candidate for this position had been trained and demonstrated her value right in front of us.

Sara received a BA in sociology from University of Wisconsin and a Masters in Jewish Communal Service from Brandeis University. Her internship experience included Harvard Hillel and the Striar JCC in Boston where she later became the teen director. In Louisville, Sara has played a leadership role in many new initiatives including the March of the Living, Kesher Kentucky, PJ Library, the Jewish Outreach Institute and Partnership2Gether.

Sara also brings to the job her passion and love for our Louisville Jewish community.  She understands its strengths and challenges. She is ready to hit the ground running beginning her new position today, June 10, 2015. Please join us in helping Sara be successful by supporting her in this new role. This is our community and we all share in making it thrive and grow.

Jewish Community of Louisville Board Chair

Each year, the Jewish Community of Louisville recognizes teens who have demonstrated exemplary leadership skills in BBYO throughout their high school experiences with the Stuart Pressma Leadership Development Awards. This year, Pressma Awards will go to Daniela Reuter, Michael Schwartz, …

NBC Nightly News in March declared Pickleball the fastest-growing sport in the U.S., and the JCC is one of the first in the city to offer this fun game. Pickleball is a cross between badminton, ping pong and tennis. It’s …