The awards, which recognize young adults who have been active in Louisville’s Jewish community and have taken on leadership roles, include a scholarship for the Jewish Federations of North America’s General Assembly. This gathering of several thousand Jewish leaders from across North America has a young leadership track designed to enhance their leadership skills. 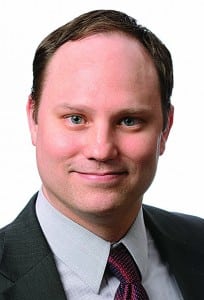 Ross Cohen
“I was excited and a little surprised and humbled that Stu (Silberman) would consider me” for this award, Ross Cohen said. “I look forward to being able to work on my leadership skills and I look forward to the GA.” A Louisville native, Cohen is an attorney with Bingham Greenebaum Doll. He earned his undergraduate degree in economics from the University of Kentucky, his law degree from the University of Louisville, and a masters in tax law from New York University.

“I’m a partner in the firm now,” he explained, “and I recently became the co-chair of the federal tax team within the firm.”

As a teen, Cohen and his family belonged to The Temple. He was involved in BBYO and attended the High School of Jewish Studies.

When he returned to Louisville, he began volunteering with the Jewish Federation. “I helped with the merger of the Federation and the Jewish Community Center,” he said, “and was involved in all the legal aspects of it and preparing the documents.”

He also worked on the JCL’s bylaws, and continues to review the language whenever the Board amends the document. “It was a big job,” he said, “but it was rewarding … helping a great organization.” Cohen also serves on the JCL’s Finance and Foundation Committees.

Helping the JCL is really just an extension of what Cohen does in his job, where he works with many nonprofit organizations “trying to apply for tax exempt status with the IRS and I advise them on general best practices,” he said. “It’s a rewarding part of my job.”

“I’ve done pro bono work for many nonprofits,” he continued. “I helped form and get tax exempt status for a legal-medical partnership” that brings doctors and lawyers together to help the underserved.

Cohen and his wife, Shannon, have an 8-month-old daughter, Elin. His parents are Joe and Trish Cohen. 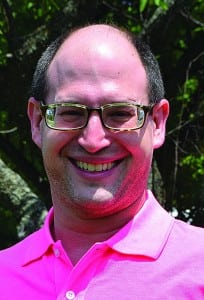 Scott Weinberg
“I was really surprised when Stu Silberman called” to tell Weinberg that he is the recipient of the Lewis W. Cole Young Leadership Award. “I certainly wasn’t expecting to win any sort of award because I really haven’t been all that connected recently with JCL. I’ve really focused my energy almost solely on KI.”

Weinberg, like Cohen, is a native Louisvillian and an attorney. With his father, David Weinberg, who was a professional with the Jewish Federation, and his mother, Beverly Weinberg, an active community volunteer and KI Sunday School principal, he had excellent role models.

He also credits Peter Anik as being a significant role model in his life, and Alan Engel and Sara Wagner as being very supportive of his involvement in the community.

Scott Weinberg said, “I grew up at the JCC. I started off as a camper and I feel like I lived here during my teen years because I was so involved with BBYO.” One year, he even served as Teen Topics editor for Community.
“I got a lot out of BBYO,” he added, “and I credit a lot of my involvement in the Jewish community today to BBYO. I think it’s essential to the wellbeing of the Jewish community here, and I’m glad to see that it seems to be on the uptick these days.”

As a result, he continued, “I’ve always been involved in Holocaust remembrance events,” including Yom HaShoah.

Weinberg attended Emory University, where he was very active with Hillel and served two terms as its president. While there, he “took a class with Deborah Lipstadt, who is a preeminent Holocaust educator.” The story of Lipstadt’s challenge to Holocaust denier David Irvine and his suit against her is now going to be made into a movie, Weinberg noted, and Hilary Swank will play Lipstadt.

He returned to Louisville for law school and then worked for Frost Brown Todd for five years. While here, he served as a BBYO advisor for over 10 years. He is still in touch on Facebook with many people who were active in BBYO at that time.

After a brief sojourn in Chicago, he and his wife, Hunter, returned to Louisville shortly after their first daughter was born so they could raise their daughter here. When they returned, he resumed his activity in the Jewish community, serving on “a lot of different committees and a lot of different Boards.”

Weinberg is also a member of the Jewish Community Relations Council and is very supportive of the outreach, education and advocacy work they do. In recent years, however, his other responsibilities have kept him from being an active member of the group.

He and his wife have attended many Young Adult Division events, and he has been a Super Sunday and YAD Campaign volunteer. One year Scott Weinberg and Julie Strull planned an Olympics-style YAD event, and, for the 2015 Federation Campaign, Hunter Weinberg co-chaired the main event with Seth Gladstein.

Today his focus is on Keneseth Israel Congregation, where he is vice president of operations and is on the slate to be elected president at the shul’s Annual Meeting next month.

“I’m really excited about and grateful for that opportunity,” Weinberg said. “I like the direction that KI’s heading.” He knows that serving as a congregational president is going “to take a lot of time,” he added, “but I feel it’s the natural progression from BBYO to Hillel to additional involvement in the community.”

He particularly enjoys KI’s Family Mitzvah series. For the first program, “we went to the Glenview and put together Purim baskets for the Jewish residents,” whatever their synagogue affiliation, Weinberg explained. “We did arts and crafts and had some of the residents of the Glenview come down to the party room and we sang some songs for them. For the residents who didn’t come down to the room, the kids in the group hand delivered Purim baskets to them.”

“We also just served dinner at the Volunteers of America Emergency Shelter a couple of weeks ago,” he continued. “So, I’m really excited about that and a lot of people want to see that type of programming in the community.”
With young daughters, he has served as the congregation’s liaison to the preschool.

Weinberg is also very interested in starting a new community Jewish Day School in Louisville. Some initial surveys have been done and visits to other communities with Jewish day schools are underway.

There have also been meetings with parents of children who might attend and with the Jewish Heritage Fund for Excellence. He is hopeful a school can be started with the first grade in the fall of 2016, and will continue adding a grade each year through elementary school.

“The response has been pretty positive,” he said. “I’m very excited to see where that leads and I’ve been involved pretty significantly in trying to pull that together.”

Professionally, when Weinberg returned to Louisville, he joined Lynch, Cox, Gilman & Mahan, now Lynch, Cox, Gilman and Goodman. Today, he is a partner in the firm and does estate planning, business organizations work and tax work. He is also licensed in Florida and is helping to grow the firm’s practice there.

“It’s been a great fit,” he said. “Shelly [Gilman] has really been a true mentor and has been great to work with. I’m very grateful for the opportunity to work with him and Ed Weinberg, and I really enjoy the work.”
The Weinbergs have three daughters: Anne Miriam, 7; Eloise, 4; and Beatrice, 2.

“I’m happy to be involved in the Jewish community and honored for the award,” he said. “We’ll see where it leads.”

Joseph J. Kaplan Young Leadership Award
Joseph J. Kaplan was a devoted member of the community who was a leader in Jewish education and the served as president of the Yount Men’s Hebrew Association (YMHA), the predecessor of the Jewish Community Center, and was instrumental in its relocation to Dutchmans Lane. He often encouraged people to remember the Jewish community in their wills. The Award was established during his lifetime and continues today in honor of his memory.

Ballers, put your skills to the test starting June 7 with a new adult basketball league. The league is for adults 18 and older, and will have a nine-week session, including eight games and a two-day playoff tournament. Ryan Perryman …

It is with significant sadness that I mark the loss of a cherished colleague. I have been aware of Lee Shai Weissbach’s groundbreaking work since my grad student days. Among his colleagues in the vibrant field of Jewish Studies, he …

Summertime means two things: Getting fit and getting outdoors. The JCC will combine both and add a big dose of fun during its Summer Fitness Fest, Sunday, June 7, 9:30 a.m. to 11:45 a.m. “We wanted to offer something special …