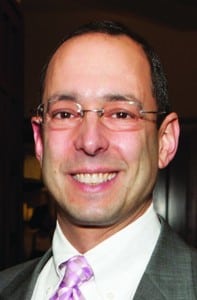 Stu Silberman has announced his resignation from the JCL after five years as its president and CEO.

Under Silberman’s leadership the JCL has transformed from an agency in crisis to a high performing integrated model of Jewish communal leadership that has become a framework upon which other communities are basing similar strategies.

“Stu is leaving us in a good place,” said JCL Board Chair Karen Abrams, whom Silberman encouraged to take on additional lay leadership responsibilities in preparation for becoming board chair.

“He took us from the brink of financial disaster to a better financial position,” she continued. “We still have a way to go, but our JCC operations are making money.”

Silberman consolidated all Federation staff to underused space in the JCC building, then led many significant upgrade projects including: construction of the lobby lounge and upgrade to the Patio Gallery, the 2011 GE Volunteers project that created the intergenerational garden and gaga pit and addressed many maintenance needs throughout the building, and replacement of many roofs, HVAC units and other capital repairs made possible through the agency’s improved financial performance.

Most recently Silberman led a successful building improvements campaign with funding matched by the Jewish Heritage Fund for Excellence (JHFE) that led to beautiful upgrades to the men’s and women’s locker rooms, increased security measures, improved play spaces for children, numerous improvements throughout the building and the construction of an ADA-compliant entrance ramp that will beautify the main entrance and also provide for safe ingress/egress for all. The JCL and JHFE have forged a strong working relationship that provides Jewish identity-building programming to the community.

Silberman’s fundraising efforts included working with lay leaders and staff to launch the Uniquely Jewish Event Series featuring Jews and bourbon, guns, comedy, baking and other fun events that educated more community members about the work of Federation. He led the selection and upgrade of the donor management system that, along with hard work by the volunteers and staff including this year’s Campaign Chair Doug Gordon, resulted a five percent year-over-year increase in the 2015 Federation Campaign. Silberman’s personal stewardship led to several significant new and increased gifts.

The JCL also employed a grant writer and benefitted from funding from many sources that previously were unknown to the agency. The newly renamed Jewish Foundation of Louisville, led by a strong committee of volunteers, has relaunched Community Impact Grants enabling bona fide Jewish agencies to expand their existing programs and create new ones.

The Jewish Community Relations Council (JCRC) launched community-wide supplemental campaigns supporting Israel’s Operation Protective Edge, Jews in need in Ukraine and for humanitarian support in Nepal. The JCRC’s Israel advocacy and interfaith relations efforts are at an all-time high, and the highly attended rally in support of the Jewish community in France, planned with the Louisville Board of Rabbis and Cantors, helped students in all three community Hebrew schools understand the dangers of anti-Semitism prevalent in Europe.

On the business operations side, the JCL has completed market assessments across all lines of business, aligning competitive pricing and ensuring value exceeds competitive offerings, and also implemented new technologies and procedures resulting in 50 percent growth in program income over the past five years.

Jewish programming has also been significantly increased, thanks in large part to Senior Vice President and Chief Operating Officer Sara Wagner, supported by a strong program cabinet. The newly hired Early Learning Center director is infusing Jewish content throughout the curriculum. The day camp is at record levels of enrollment. The recently launched J Forty-Fivers for 4th and 5th graders provides fun development opportunities for Jewish youth throughout the community, and adds to an already successful Teen Connection program for 6th- 8th graders.

The BBYO program has grown to 128 participants and is attracting national attention for its success. Most recently Louisville sent a large teen delegation to Atlanta to participate in their International Convention where they met Jewish peers from around the country and the world. After a seven year hiatus, Louisville resumed sending teens to the JCCA Maccabi games. Louisville has continued to increase participation in the Partnership2Gether program, and this past March hosted the US-based steering committee introducing our peers to our JCC and other agencies and congregations.

CenterStage, the JCC’s performing arts program led by a very strong volunteer base and dedicated staff, has expanded operations to include new programs taking place at the JCC and in public schools throughout the community. Through investment where others might have cut, the program has turned around and is now significantly contributing to the bottom line as well as serving an important outreach function bringing many first-timers into the JCC.

Silberman systematically implemented steps to address the inadvertent naming confusion caused when the JCL was launched, including leading the effort to reintroduce and strengthen the Federation brand. Now the JCL is gearing up for a brand update on the JCC side as well, consistent with the new national guidelines.

In addition to streamlining operations, Abrams said, “he has made a special effort to collaborate with all the agencies, synagogues and rabbis and cantors and that has been greatly appreciated.”

He has also met regularly with past presidents and ensured that the building blocks are in place for the JCL’s future.

“Stu has also made us aware of what our national associations can offer us,” Abrams stated.” Early on in his tenure Silberman enrolled Louisville in JCCA benchmarking. The initial results placed the Louisville JCC among the bottom of our peer cities. Rather than being disheartened, Silberman embraced the bad news initially delivered. Through systematic investment in staff, program content and prudent facility upgrades, the JCC has raised performance across the board – a rare accomplishment according to JCCA – and now exceeds the national average for JCCs of all sizes in key areas such as Jewish engagement. Staff morale has improved greatly and the results are visible throughout the agency.

Silberman continuously looks for ways to increase staff satisfaction by helping them advance in their careers. “Stu has helped send a lot of our staff to national conferences like the Jewish Federations of North America’s General Assembly and JCC Association meetings including the Biennial,” Abrams pointed out. “Most recently, he sent a staff member to Israel for the first time. She came back extremely energized. Staff really appreciates these opportunities for continuing education and Stu’s been instrumental in this.”

Silberman took his own Jewish identity and learning seriously, setting aside the time to enroll in the Florence Melton School of Adult Education, a program he personally helped relaunch.

As a result of the JCL’s considerable accomplishments and increased participation with supporting agencies, the JCL has garnered national attention, including from other communities.

Silberman will join the Minneapolis Jewish Federation as their CEO this summer. “The Executive Committee and Board are thankful to Stu for leaving us in such a good position,” Abrams concluded, “and we are working as we speak for the future.” “We wish him the best in his new endeavors,” she added. The community is invited to a farewell gathering on Thursday, June 11, from 5-7 p.m. at the JCC.

First and foremost, I would like to thank the Jewish Community of Louisville, Cantor David Lipp, Sara Wagner and the March of the Living Fund established by Natania Lipp, as well as my parents for giving me the opportunity to …