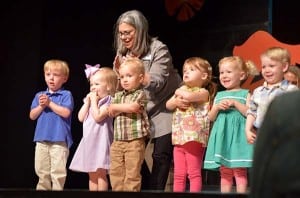 “The parent committee worked so hard, bringing in items for the auction and helping set up,” said Angie Hiland, ELC assistant director. “It wouldn’t be possible without all their hard work.”

“And it wouldn’t be possible without the sense of community we have here,” ELC Director Norma Cahen added.

At the Spring Sing, ELC children go on stage and sing songs they have learned and practiced for their parents and other family members. Each class got up and sang a song or two, including “On Top of Spaghetti,” “Zipadeedoodah,” and “You are My Sunshine.”

At the end, they all sang “Shalom Chavarim,” the “Goodbye Friends” song.
As children got on stage, they all looked for their parents, who waved back at them.

The set on stage was especially fun this year because CenterStage left the “Seussical, Jr.” set up and allowed the children to sit on the risers.

“It made such a beautiful backdrop to the show,” Cahen said. “We are so thankful to John Leffert and his staff for leaving that for us.”

The funds raised will help the ELC purchase higher-priced items for the classrooms such as art easels. “It will help us have age- and developmentally appropriate programming for the children,” Cahen said.

Summertime means two things: Getting fit and getting outdoors. The JCC will combine both and add a big dose of fun during its Summer Fitness Fest, Sunday, June 7, 9:30 a.m. to 11:45 a.m. “We wanted to offer something special …