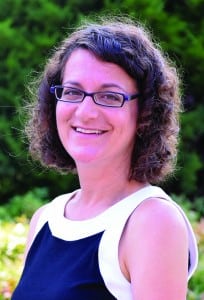 The phrase tikkun olam, the repair of the world is often heard in the Jewish world as something to which we should all aspire. When it comes to Jessica Goldstein, this year’s Julie E. Linker Community Relations Young Leadership Award Winner, tikkun olam truly defines her life today.

When she and her husband, Matthew Whitworth, both Louisville natives, returned to their hometown in 2005 after 17 years of studying and working in a variety of locations, they brought their San Francisco jobs with them. As a technical publishing industry telecommuter, Goldstein was in close contact with her colleagues around the country, but didn’t connect to her community here.

When her son, Simon, started kindergarten, Goldstein was ready to get involved. “I had left my publishing career,” she said, “and a friend invited me to join the JCRC [Jewish Community Relations Council] – it was a perfect fit.”

Goldstein didn’t have a clear idea of what the JCRC does, but when she met with JCRC Director Matt Goldberg, “the more we talked, the more excited I got. So many of the areas they’re involved with – fair housing, fair pay, civil rights, environmental issues, hunger, women’s reproductive freedoms, higher education – all of which I think represent core Jewish values – are causes near and dear to my heart.”

Joining the JCRC gave her an opportunity to pursue justice with the Jewish community, reconnect with people she had known during her school years, and make new connections with others.

Most of her activity has been with food security issues. She participated in the Food Stamp Challenge, during which she and others subsisted on a weekly food budget of $33 – just $3.51 a day – the amount the average individual gets through SNAP, the Supplemental Nutrition Assistance Program.

“I knew it wasn’t going to be easy,” she said. “I had no idea how hard it would be.” As a vegetarian focused on eating healthy, she found she could only afford about 1,100 calories a day – less than the minimum needed to sustain her normal activities. Her thinking became muddled and she was always focused on the next meal.

The experience made a big impression on her and inspired her to deepen her commitment to anti-hunger advocacy.
She’s now working with Brian Riendeau, the executive director of Dare to Care Food Bank, and Matt Goldberg, the JCRC director, to plan a Hunger Seder.

“The Hunger Seder is a hunger awareness project of MAZON: The Jewish Response to Hunger,” she explained. “This year, the theme is childhood hunger because the next Congress will be asked to reauthorize the limits for WIC.” (WIC is a Federal supplemental nutrition program Women, Infants and Children that provides grants to states.)

To increase the impact, Goldstein explained, the JCRC decided to host the event at the Dare to Care warehouse. “The size of the Dare to Care facility gives you an idea of the scope of hunger in our community. … One in six Louisville residents doesn’t get enough food to eat to live a healthy life,” she stated.

Since Dare to Care’s shelves aren’t always fully stocked, the empty places will help “get across that as much as our community supports Dare to Care today, our responsibility and response needs to grow,” she said.

In carrying out MAZON’s hunger awareness initiative, Goldstein is also striving to “increase Louisville’s faith communities’ support for Dare to Care” and hopes it will carry over to increased recruitment and support for next fall’s Hunger Walk.

The Hunger Seder will be May 20, and participation will be limited to leaders of Louisville’s faith communities with a goal of empowering them to become advocates for addressing the issues of hunger. Goldstein also hopes it will encourage more people to become Dare to Care sustaining members or to volunteer time to help the agency.

In addition, she explained, “the JCRC received a Community Impact Grant from the Israel Action Network to develop or strengthen ties with parts of the community where we don’t have connections or where connections have faded. This program can serve that purpose, … enabling us to build bridges around a shared cause.”

The JCRC is reaching out to Interfaith Paths to Peace, the Center for Interfaith Relations, and a number of congregations affiliated with a wide cross-section of faith communities. From the Jewish community, Rabbi Michael Wolk and Cantor Sharon Hordes from Keneseth Israel are involved with the project.

Holding the Hunger Seder in late May has another advantage. It comes right before Shavuot, the spring pilgrimage festival that marks both the receiving of the Torah at Mt. Sinai and the end of the spring barley harvest and the beginning of the summer wheat harvest. Goldstein is excited about the natural tie-ins, and Cantor Hordes told her she hopes the Hunger Seder will also help raise awareness about Shavuot.

In addition to the Hunger Seder, Goldstein chaired the Jewish Louisville team for the Hunger Walk and is pushing the JCRC to look at other poverty issues – clothing and shelter.

She worked with Project Warm Executive Director Frank Schwartz to organize a JCRC Project Warm Blitz last fall, recruiting volunteers to help weatherize homes of low-income seniors and those who are permanently disabled. “I hope this will be the first of an annual service project that the JCRC will spearhead,” she added.

For a number of years, the JCRC has hosted an interfaith Chanukah party as an opportunity to share Jewish traditions with our non-Jewish neighbors. This year, Goldstein pressed to incorporate a winter clothing drive into the event. “We ended up with eight bankers boxes filled with mostly new mittens, gloves and hats,” she said. The items were donated to the 15th District PTA Clothing Assistance Program “to make sure needy children have proper clothing to withstand the elements” while waiting for their school buses.

Currently, Goldstein works part time at the Keneseth Israel Preschool and takes on occasional freelance editing projects. She also does volunteer work with the Brandeis Elementary School PTA and is the Director of the Sudanese Refugee Education Fund.

On learning that she will receive the Linker Award, Goldstein had a twofold reaction. “On the one hand,” she said, “it is gratifying, flattering and somewhat humbling when I read the list of the people who won the Linker Award before me. On the other hand, it means I must keep going forward and keep building on the work I’ve done so far. It is a call to action not to take my foot off the gas pedal.”

Julie E. Linker was a young leader in the Louisville Jewish community with a passion for community relations work. When she died, the Julie E. Linker Community Relations Young Leadership Award was established to perpetuate her name and to encourage young people who share her passion and give them the opportunity to attend the JCPA Plenum.
The Linker Award will be presented at the Jewish Community of Louisville Annual Meeting, Sunday, June 14, at 9:30 a.m. at the Jewish Community Center. The community is invited.

The Center for Interfaith Relations will present the 20th Annual Festival of Faiths from Tuesday, May 12, through Sunday, May 17. This year’s program, Sacred Journeys and the Legacy of Thomas Merton, will be a five-day celebration of music, spoken …