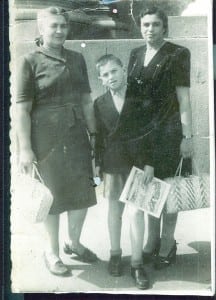 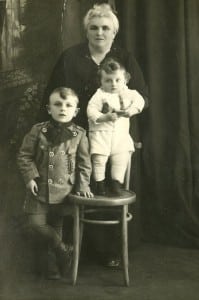 The annual Jewish Community Relations Council Community-Wide Yom HaShoah Commemoration, “The Story Has to Be Shared,” will be Thursday, April 16, at 7 p.m. at Keneseth Israel. RSVP today.

“For the past two years, we’ve broken away from the format of hearing a speaker and truly celebrated the coming of the next generation,” said Yom HaShoah Chair Fred Whittaker. “There’s been great participation of youth and teens.”

During the planning for this year’s program, he explained, the committee decided to return to having a survivor speak, but keeping the same sense of celebration of the next generation because “we are rapidly approaching the time when we will not have survivors with us,” he added.

This year’s speaker, Conrad Weiner, was a child survivor, Whittaker continued, “but he was old enough that he still retains memories that were personal to him. … Conrad makes great effort to convey to the audience that we are not just listening, we are bearing witness.

Weiner was born in Storojinetz, a small town in Bucovina, once part of Romania and currently part of the Ukraine, in 1938. After a brief occupation of the region by the Soviet Army in 1941, Romanian authorities in alliance with German forces started a massive campaign of annihilation and deportation of Jews to Transnistria.

They were taken by cattle car, a journey of two days and one night, and then forced to walk for two weeks in snow and mud to the forced labor camp, Budi. He was 3-1/2 years old at the time, and, luckily, he had a strong uncle who carried him most of the journey.

Weiner will share the story of how he survived until 1944 when, at the age of 6-1/2, he and the 300 surviving prisoners at Budi were liberated by the advancing Soviet Army and repatriated to Romania until he and his family were finally allowed to come to the U.S. in 1960.

Weiner is committed to educating the community about the Holocaust, his experience and the lessons, despite the difficulty of sometimes recounting it. “It must be done to keep our promise, ‘Never Again,’” he states. “We must learn from history in order to not repeat it. We see many examples of intolerance everyday.

“It is unfortunate that today, in the 21st century, we still have wars, ethnic cleansing, poverty and hunger,” he added. “Education and dialogue are key elements in sharing the world in peace and harmony.”

“We have a great obligation not just to listen,” Whittaker observed, “but to be changed by the words we hear.”

Students from four public schools who have participated in a special Anne Frank educational program with the Louisville Orchestra will participate in the program, as well as representatives from

classes at Manual and Atherton High Schools and St. Francis of Assisi who have studied about the Holocaust will also participate.

As in years past, the program will honor the memories of those who perished during the Holocaust and will include the traditional candle lighting recalling the different groups that were persecuted and the recitation of Elie Wiesel’s adaptation of the Kaddish.

“Becoming a witness doesn’t mean being overwhelmed by the darkness of the Holocaust,” Whittaker added. “It means being called into greater meaning and empowerment and connecting to the deep traditions of Yom Hashoah.”

The entire community is invited to this commemoration.

When Eric Gurevich went on a Birthright Israel trip six years ago, he never imagined it would lead to saving a life. While in Israel, his group saw a presentation by Gift of Life, a bone marrow registry organization founded …

Throughout the year there are specific events that serve as the best reminders for why we support the Jewish community, locally, around the world and especially in Israel. One of those events occurred this past weekend, as the Jewish Community …