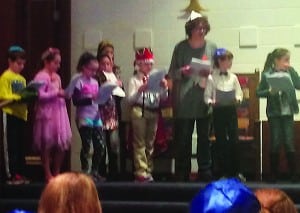 Louisville Beit Sefer Yachad celebrated Purim by performing a musical comedy that told the story of the holiday on Sunday, March 8. The Purim Shpiel, was held at Anshei Sfard that morning since the Purim celebration on the holiday itself had to be cancelled due to snow.

The play, starring 20 LBSY students was received with lots of laughter and excitement. The audience was won over by King Ahasuerus played by Benjamin Greenberg and Queen Esther played by Lauren Goldberg.

The King began the play by singing Let Her Go (sung to Let it Go from the movie Frozen) to Queen Vashti played by Jenna Shaps. Haman, played by Michael Evans, was booed by everyone every time his name was spoken.

Hillary Reskin wrote and directed the play, and Michael Evans and Isaac Weiss, LBSY graduates, returned to Sunday School just to perform and help with the play.

Crisis in Ukraine The past year has been a trying time for Jews all over the world as crises have affected our community to such an extent that the whole world has taken notice. War last year in Israel; violence …

On October 30, 1915, Ferdinand Friendly Wachenheiemer (the co-creator (with Edward R Murrow) of the television documentary concept in 1948) was born in New York City. Fred Friendly (his changed name) was also the president of CBS News (1964-66). Almost …

During the Holocaust, those who opposed Nazi actions against the Jews were as vulnerable to persecution as the Jews themselves, and many paid the ultimate price. Dietrich Bonhoeffer, a German Lutheran pastor, theologian and anti-Nazi dissident, was among them. The …