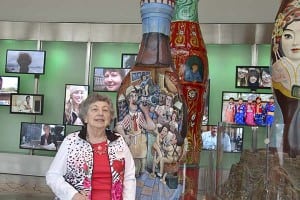 First stop was at McDonald’s along the way as some of us needed coffee to wake us up fully. From there we drove on to the famous Gaylord Opryland Hotel. We all scattered like seeds in the wind to explore the hotel and find our own unique lunches. Nobody got lost.

Next stop was downtown Nashville, TN, where we picked up a woman who gave us a running commentary during the bus tour of the city of Nashville. We saw where Minnie Pearl lived, Tootsie’s Bar (many country and western singers had their careers started here), the home of Tammy Wynette and George Jones, Martina McBride’s home, Ronnie Milsap’s home as well as others.

Then we were off to our next hotel near Stone Mountain in Atlanta, GA.

On Monday, April 28, we were taken to the Jewish Community Center in Atlanta where we were greeted like royalty. The facility is huge and well planned out. Jamie Perry, Mature Adult Program Coordinator, met us at the front and welcomed us.

Their budget is $22 million and includes two outdoor swimming pools, six tennis courts and 20 acres for a children’s camp in the summer. The indoor facility includes exercise rooms and another swimming pool.

After the tour we were entertained with a special magic show put on by Debbie Leifer. Lunch – fried chicken, which was delicious by any standard – was served, at which we met seniors from Atlanta and made some new friends. We were allowed to take the small Coca Cola bottles, which decorated the tables. By the way, it is forbidden to mention the name of the other popular cola in the city of Atlanta! We left feeling full and happy to meet new people. And again, nobody got lost.

Then it was off to The Breman Museum, where we were met by the curator, Doris Goldstein. This museum contains photos and artifacts of the Holocaust from WWII. We were honored to hear a survivor of the Holocaust, Henry Bernbrey, give a presentation of his experiences. It was very emotionally moving for all of us.

Immediately thereafter, we went to downtown Atlanta where another tour guide narrated stories about homes and businesses. We saw the Ferris wheel downtown, the CNN building, the Turner building, Coca Cola headquarters, the cash museum, the grave of Martin Luther King and his wife, the home where Martin Luther King was born and the final leg was to the Buckhead area. At Buckhead we saw the home of the late owner of Coca Cola, and many other homes of wealthy residents.

Dinner that evening was at the Metro Café, which was delicious, and topped off the evening with a multiple layer piece of chocolate cake that is fondly called Million Dollar Cake.

On Tuesday, April 29, we toured the Coca Cola museum. It is a fascinating place. There are giant Coke bottles decorated with the native costumes of many different countries where Coke is sold. But, the real highlight is the tasting room where there are several dispensers of all the products sold in different countries and you are free to taste them. One in particular, called the Beverly has turpentine as one of its ingredients, supposedly to clean the palate. Most people who tried it grimaced.

After lunch at an outdoor facility near the Coke museum we walked the short distance to the Georgia Aquarium and were treated to many creatures of the sea, including an enjoyable dolphin show.

On Wednesday, April 30, we made the short trip to Stone Mountain. Some of us went on the trolley to the top of the manmade granite mountain while others went to the museum. A great photo was taken with the background of the carving of Confederate President Jeff Davis, General Robert E. Lee and General Stonewall Jackson. The statue carvings were started in the 1920’s and finally finished in 1970. The depression of the 30’s and World War II impeded the progress.

We returned to Louisville the evening of Wednesday, April 30, very tired and happy for the opportunity to make the trip. And amazingly enough none of our seniors were left behind. We are all looking forward to the next road trip wherever it goes. 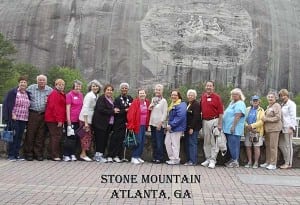 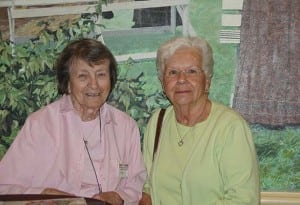 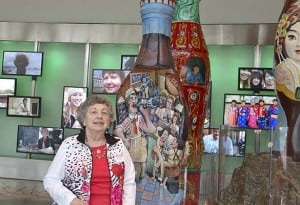 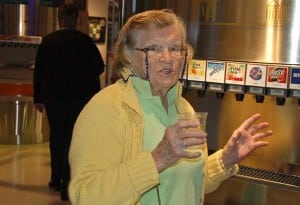 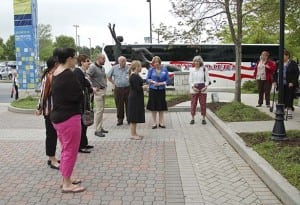 Thank You, Laos! This past week, the Anti-Defamation League issued a comprehensive report on Anti-Semitic attitudes around the world – the largest ever survey of its kind. The results were sobering and depressing. The countries polled represent over four billion …

Children from just one year old through their early teens helped PJ Library of Louisville and Jewish Family & Career Services (JFCS) support our community at the Second Annual Tzedakah Fair on May 18. This year’s event exceeded the success …

Louisville native Michael Saag, M.D., went into medicine intending to become a cardiologist, but in 1981, as the first cases of AIDS were being described in Los Angeles and New York City, his interest in solving medical mysteries led him …