Freedom is only part of the story and half of the truth. Freedom is but the negative aspect of the whole phenomenon whose positive aspect is responsibleness. In fact, freedom is in danger of degenerating into mere arbitrariness unless it is lived in terms of responsibleness. That is why I recommend that the Statue of Liberty on the East Coast of the United States be supplemented by a Statue of Responsibility on the West Coast.
– excerpt from Man’s Search for Meaning by Holocaust survivor Viktor Frankl 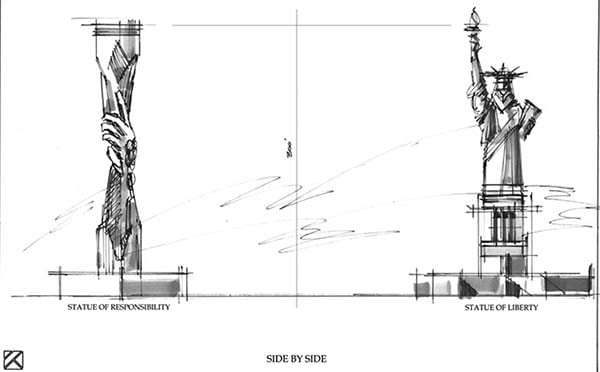 As we approach Shavuot, it’s worth remembering that we have our own temporal version of Frankl’s vision. I wonder whether this was in the back of his mind when he spoke of the desire for a complementary structure to Lady Liberty. In the same way that we have a Festival of Freedom in Pesach, we have a Festival of Revelation – representing the Responsibility that comes with Freedom – in Shavuot.

It was not always thus.

The Torah says nothing about the connection between the Feast of Weeks and the Revelation at Sinai; rather Rabbinic commentators much later supply the historical connection between the two events. While Biblical Israel needed an agricultural celebration for various harvests for its agrarian economy, it seems appropriate that, as the Rabbinic era began and more of the Jewish or Judean people became urban, that a historical dimension would be more meaningful. Thus were the dots of freedom connected to revelation at Sinai.

When the Zionist project of the State of Israel was developing in the early 20th century and the Kibbutz and Moshav movements tried to consciously recreate agricultural values, there was a resurgence of liturgical secular creativity including musical pageants and celebrations for Shavuot renewing it as a modern harvest festival.

For those of us in the diaspora, primarily urban Jews, we tend to still be inspired by the historical connection made by the rabbis and the addition made by the kabbalists of Tzfat in the 16th century. Building on a midrash that we ancient Israelites almost overslept the revelation, they developed an all night session of Torah study, a Tikkun, to ‘atone’ for the sin of our ancient ancestors. Traditionally one is supposed to study all night and pray early in the morning, a Hashkama minyan (a ‘wake-up’ service) to atone for that ancient sleepy-headed misstep. Caffeine is normally ubiquitous in such settings.

At least four Tikkunim will take place this Shavuot in Louisville, all commencing on Tuesday night, June 3rd:

1. At 9 p.m., the Temple will feature Rabbi David Ariel-Joel teaching “The Hidden Holiday of Shavuot: From the Covenant of the Rainbow to the Covenant at Sinai” speaking of the holiday as one of the seven Torah holidays and its development in later rabbinic thought using text from the Dead Sea Scrolls.

2. On that same night, also starting at 9 p.m., Chabad will commemorate the holiday with the festival service, a dairy meal, and Torah study throughout the night with a new topic being presented each hour. There will also be time for the reciting of the traditional excerpts of Torah known as “Tikkun for the night of Shavuot.”

3. Slightly earlier, at 8:45 p.m., Anshei Sfard will host a service, a light dinner with Torah Study through midnight. Rabbis Joshua Golding and Evan Rubin will teach about the relative importance of Torah study (Talmud Torah) compared with performance of commandments (Maaseh HaMitzvot).

4. At AJ, prior to the beginning of the holiday at 7:45 p.m., Adath Jeshurun, Keneseth Israel and Temple Shalom will jointly sponsor Revelation 2.0: Dairy Domain with a pre-holiday film talk (Cinematic Sinai) including clips from films with Biblical themes, followed by a service, a light dairy meal from Cafe Fraiche and teachings from Rabbis Stanley Miles, Michael Wolk, Laura Metzger and Robert Slosberg on topics ranging from the culinary to Star Trek, from the Mekhilta to the Mishna Brura. Musical interludes will be provided by Cantor Sharon Hordes and myself.

There has always been a messianic connotation to the late night study sessions, whether they last until dawn or until midnight. If we can only make it all night, maybe the Messiah will come.

Speaking of the realization of an abstract hope in material form, I was startled to find that Viktor Frankl’s vision, with which I began, has a Foundation committed to its realization. There is a project called The Statue of Responsibility Foundation which, in 2013, was taken over by the State of Utah that hosts the artist, Gary Lee Price, who designed a statue of just such a monument to be built in one of five potential host cities: Long Beach, San Diego, Los Angeles, San Francisco (California) or Seattle (Washington).

As we prepare for Shavuot 49 days after constructing our Seders of Freedom, let’s all use that same creativity to build our own temporal sculptures of responsibility at one or more of the opportunities available to us on the night of June 3. 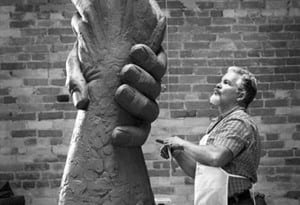 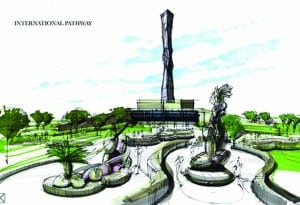 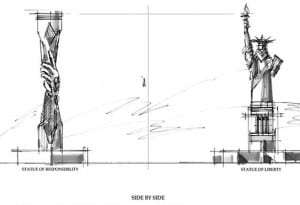 (See full event photo gallery at the end of this article) When Paula Shoyer came to Louisville for the Jewish Federation’s Uniquely Jewish Baking event, there was a buzz of activity and excitement. In the afternoon, nearly 20 people crowded …

IMAX is the ideal format for panoramic presentations and the producers of the new film, Jerusalem, Taran Davies, George Duffield and Daniel Ferguson, use this venue to highlight the magnificence of the ultimate holy city, focal point of the Muslim, …