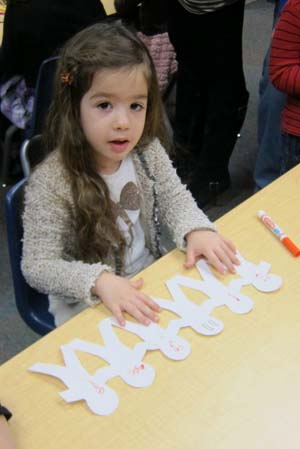 During story time, children listened to a story called “Anashim Tovim” (“Good People,” based on the popular Israeli song by Naomi Shemer) and worked on a craft related to the story’s theme. There was also time to play with Hebrew letter puzzles, listen to Israeli children’s songs, and to eat an Israeli snack.

Event organizer Judith Danovitch said: “It was great way to promote interaction between Hebrew speaking families in Louisville and to expose children who don’t speak Hebrew fluently to Hebrew words and Jewish concepts.”

Danovitch, a new Louisville resident who speaks Hebrew with her young son, is planning more events in the future, and intends to make them accessible to families who do not speak Hebrew at home but who would like to expose their children to modern Hebrew and Israeli culture.

The Jewish Heritage Fund for Excellence has announced its latest grant to the Jewish Community of Louisville for a total of $355,340. The grant reaffirms JHFE’s partnership with the JCL and its support of the JCL’s mission. There are several …

This past month, I attended the annual Plenum of the Jewish Council for Public Affairs, the umbrella advisory organization of the 125 JCRCs around the country and 17 national agencies. Other delegates from Louisville were JCRC Chair Bob Sachs, JCRC …

A talented Israeli photographer and videographer, who is coming to Louisville through the Partnership 2Gether program, will show how he has captured his country’s culture through a camera lens, while passing on some tips for those who want to enhance …