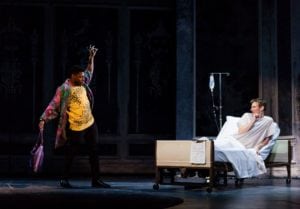 Richard Prioleau and Mark Junek perform a scene from “Angels in America.” (photo by Bill Bryme)

Twenty-five years since its premiere in San Francisco, Tony Kushner’s Angels in America still seems particularly welcome.
The play, which the Actor’s Theatre in Louisville is about to reprise, has never seemed more morally relevant. For those who have never seen it, this is a wonderful opportunity to see one of the greatest masterpieces of the American stage.
For those unfamiliar with it, Kushner’s drama explores the crisis of AIDS during the Reagan years, but it only hints at its multicultural, historical and ethical questions, not least of which is its challenging emphatic focus on Jewish themes of individual and collective responsibility.
One of the play’s most memorable speeches is intoned by a rabbi and ultimately forms its moral touchstone. Conversely, Roy Cohn, who served as aide to Senator Joe McCarthy and mentor to Donald Trump, also is depicted, representing the moral nadir of society.
While Angels is often interpreted as an unabashed liberal paean to multicultural tolerance and understanding, Kushner also takes a surprisingly conservative approach to the moral gains and losses incurred by Jews in their American success story.
Angels presents a staggering range of concerns, including an imaginative treatment of the historical migration of the Mormons, the McCarthy hearings, historical figures such as Cohn and Ethel Rosenberg, the politics of the Reagan era, the supernatural presence of ghosts and even the nature of Heaven.
The play’s pivotal character is a young gay Jewish man named Louis, who carries the biggest moral burden of the production. We first encounter Louis at his grandmother’s funeral, where he confesses to his boyfriend, Prior, recently diagnosed with Kaposi’s sarcoma, that he had no contact with her over the past decade. This guilty admission provides a critical ethical context for a subsequent betrayal when Louis chooses to flee Prior when he needs him most.
While capable of delivering sweeping judgments about the historical culpability of nations and groups, Louis is a moral failure in his own relations with others. His sovereign authority is the self, an ascendancy that marks a departure from what was once an inescapable framework of moral obligation that Jews once inherited at birth.
Louis’ responses to those around him are an essential conduit for the drama’s spiritual approach to redemption, which presumes that the fate of the nation, and even the cosmos, depends on the individual’s assumption of responsibility.
Angels has often been interpreted as an appreciation of the successful acculturation and intermingling of America’s disparate religious and ethnic groups. Yet it is also strikingly evident that its ethos can be traced to earlier portrayals of the dangers of the thoughtless pursuit of material well-being and betrayal of Jewish values in much earlier literary works such as Anzia Yezierska’s moralistic fables of tenement life in the 1920s; Budd Schulberg’s What Makes Sammy Run? (1941); and Philip Roth’s Goodbye Columbus (1959).
At a time in which we witness the complete erosion of any notion of the common good in this country, it is hard to imagine a more timely and urgent revival. Few dramas have ever placed the notions of nation and individual moral progress – Tikkun – so front and center.
In Kushner’s rendering of Jewish characters, survival at any price is simply not a part of the Jewish bargain. His creative vision is informed by Deuteronomy’s vision of “Justice, justice shalt thou pursue, that thou mayest live” (16:20), which may depend on the notion that it is a moral imperative not to be too much at home in one’s home, that a people’s humanity and moral energy is best marshaled in the face of uncertainty rather than belonging and self-gratification.
In this vital sense, Angels delivers Judaism’s prophetic message about the plight of the stranger: his/her vulnerability in the face of the state’s destructive indifference.

(Ranen Omer-Sherman is the JHFE Professor of Jewish Studies at the University of Louisville.)