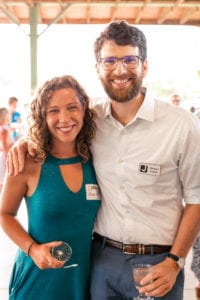 Alayna Altman was in New York getting ready to board a flight to Spain when she got a call from Louisville. It was her physician with bad news.
Altman needed to come home right away. A benign tumor in her right ankle, which had been bothering her since a backpacking trip in Alaska, was worse than he thought, MRIs showed. There was possible bone damage. It had to come out right away.
For Altman 23, a budding farmer, nature guide, cyclist and artist, the news came as a blow – at first.
“I was sad and scared,” she recalled, “but a certain part of me was relieved. I knew there was a possibility I would need radiation and it wasn’t yet determined how serious the tumor was. I felt like I had no control of the situation. The feeling of relief is hard to explain. Maybe it came with not having control.”
She was supposed to begin what she called her “world tour,” starting with a farm in Valencia, Spain, where she would continue her studies into permaculture – sustainable ecosystems.
Now, she was heading home for surgery, at least two months of recovery when she couldn’t walk, and – for the short term anyway – an uncertain future.
Then she met Michael Fraade.
“I met Michael on the High Holy Days when I saw him lead a service,” Altman said. “A lot of people told me, ‘you’ve got to meet Michael Fraade. You guys would get along so well,’ and we did.”
She began helping Fraade, then JOFEE director at The J, tending the Community Garden. (By then, she was wearing a boot over her leg, enabling her to get around.)
They would go to programs together and meet for coffee, where Fraade told her all about JOFEE.
“My jaw was on the floor” as she listened to him describe the work he was doing, Altman said. “After a few months of us spending some time together and me learning about the JOFEE program, he asked me if this would be something that I’d be interested in.”
It was.
“For me, when I learned that he was leaving, all the stress of the surgery, and everything that seemed like my life was falling apart, it all just came together at that moment. It felt like this next step of coming home and settling was exactly what I needed.”
Altman, the new JOFEE director, took over Aug 12.
Altman, who grew up in Louisville, has already compiled an extensive resume for a sustainability professional.
A 2017 graduate of Colorado College, where she majored in studio art, Altman went to work for a company called Backroads, leading outdoor expeditions in Alaska and Wyoming.
Before long, though, she traveled to Israel where she spent months studying permaculture at Kibbutz Lotan in the Arava Valley. She was supposed to return there on her world tour after Spain.
“It was amazing learning about farming again from a Jewish perspective,” she said.
She has plenty of experience working the land in Kentucky, doing stints on chemical-free organic farms. She even did a stint on an olive farm in Tuscany.
Yoshi Silverstein, director of the JOFEE Fellowship program at Hazon, lauded The J for hiring a new director, instead of letting the program whither with Fraade’s departure.
“In a niche program, when you lose the person leading the charge, you lose momentum,” he said, “so the fact that the Louisville J is continuing to fund the position and bringing in a strong new hire to fill Michael’s role is an indication of continuing commitment.”
Altman plans to take JOFEE in new directions such as infusing artistic expression into the program. A trained artist, she wants to hold painting classes in the garden, teach plant observation through drawing and do sculpting with trash.
She also wants to create more hands-on projects, such as a building made from mud – something she did in Lotan.
I would love to get kids involved in doing this … all you need is sand, straw and earth.”
And she wants to use the bumper crop of mint leaves in the garden to create a new event: “Julips at the J.”
But Altman is especially interested in helping the community cope with climate change in ways other than political action.
“A lot of people are very daunted by the environmental crisis that we’re facing,” she said. “We read these news reports and we feel a little bit helpless.
“It doesn’t have to something that’s so distant and scary to us,” she continued. “It starts with our community; it starts with knowing your neighbors, sharing your food. This is something we can work with, to be more accessible to people.”